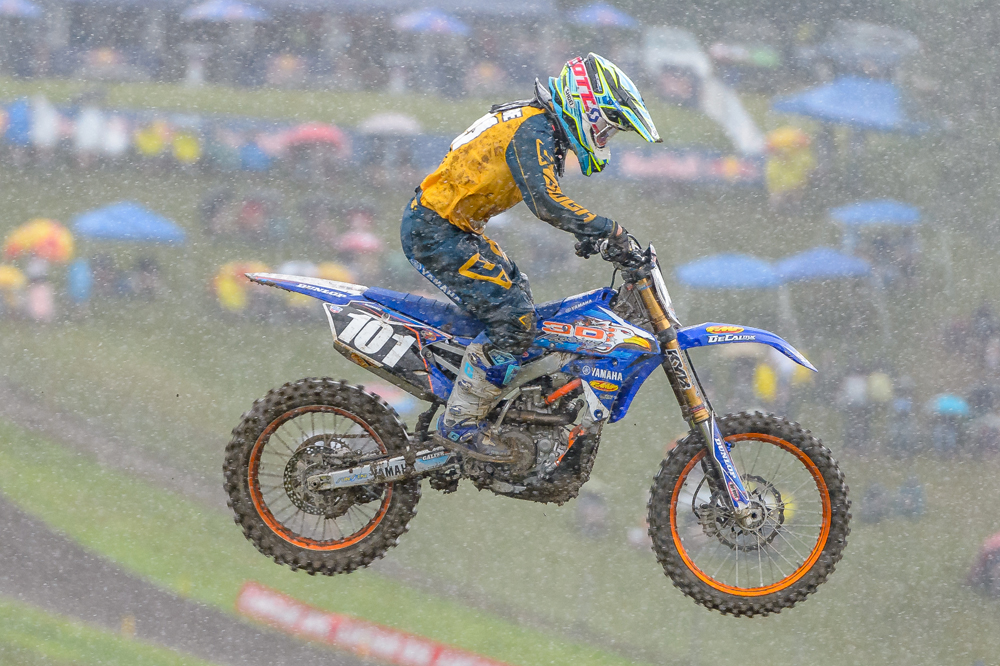 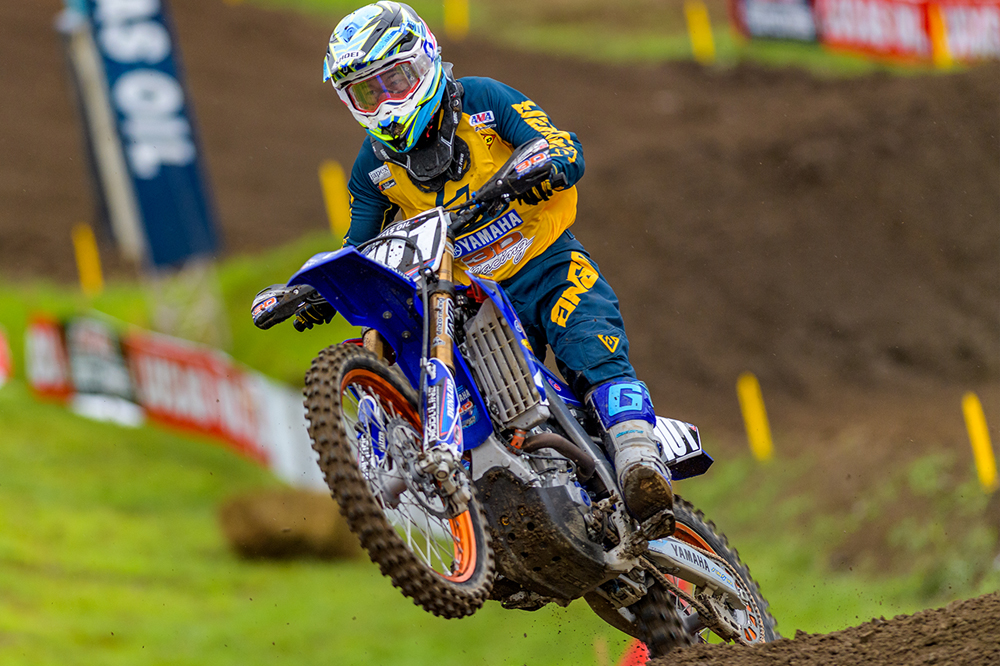 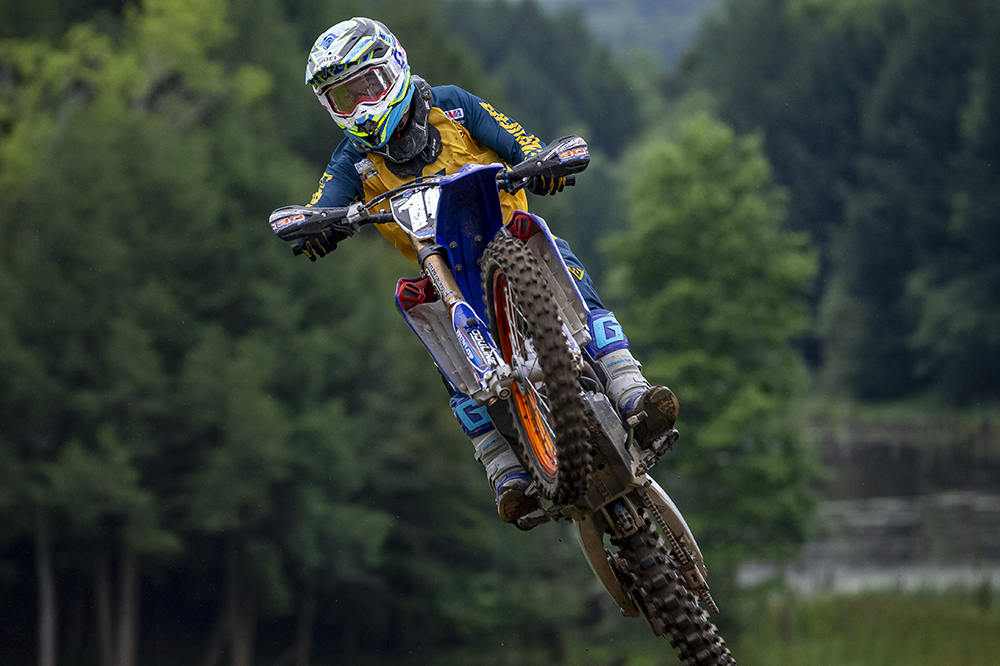 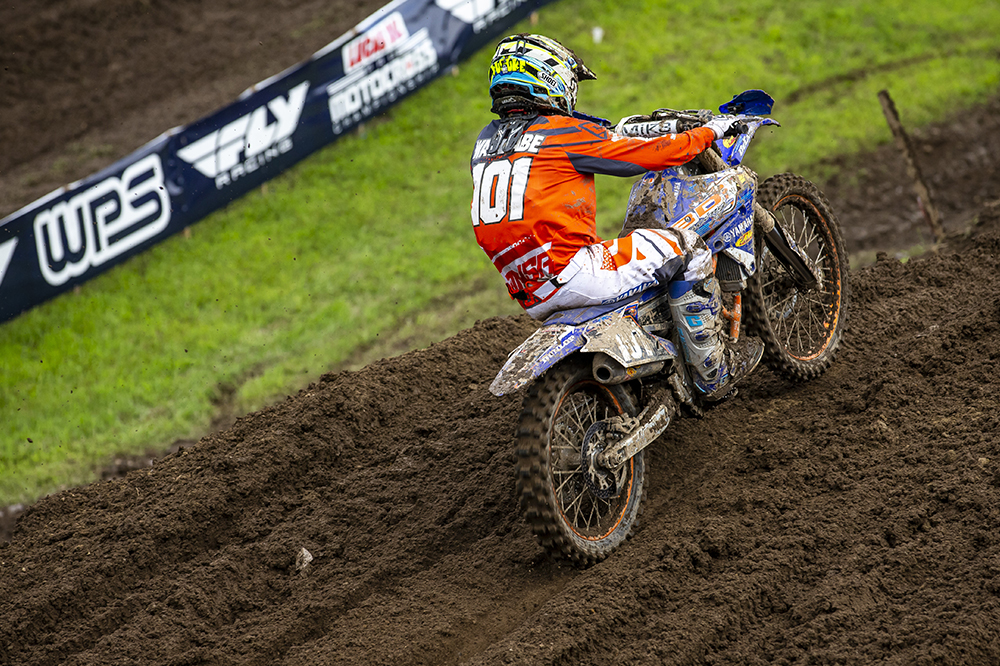 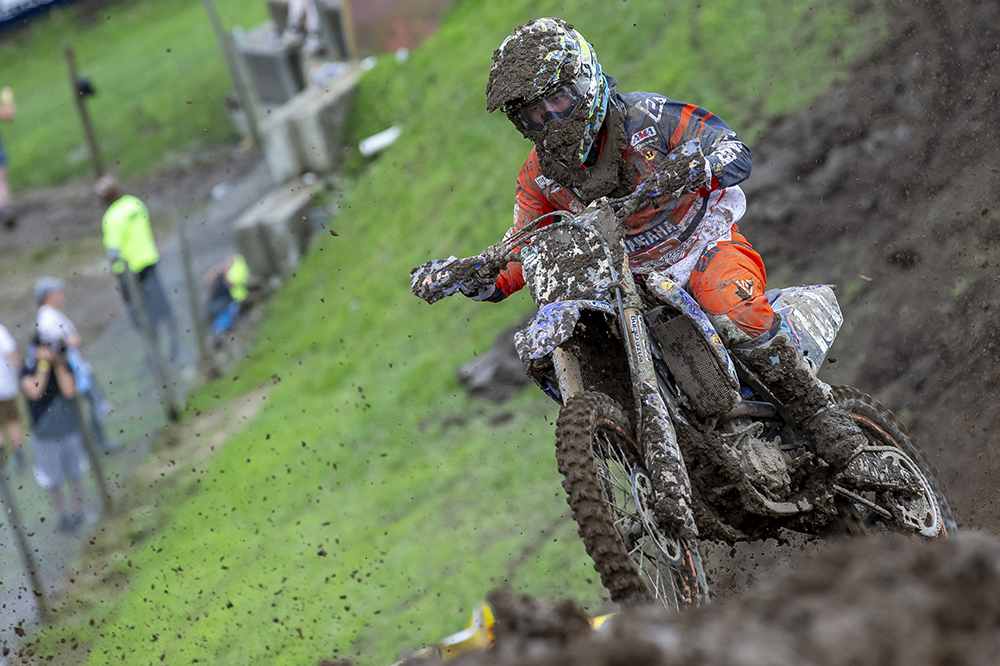 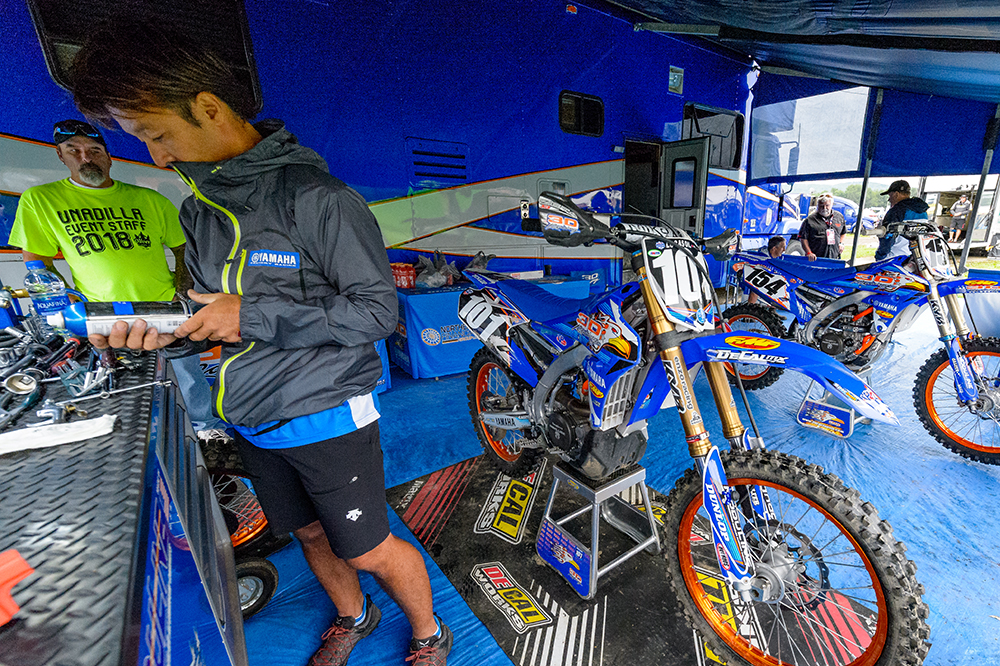 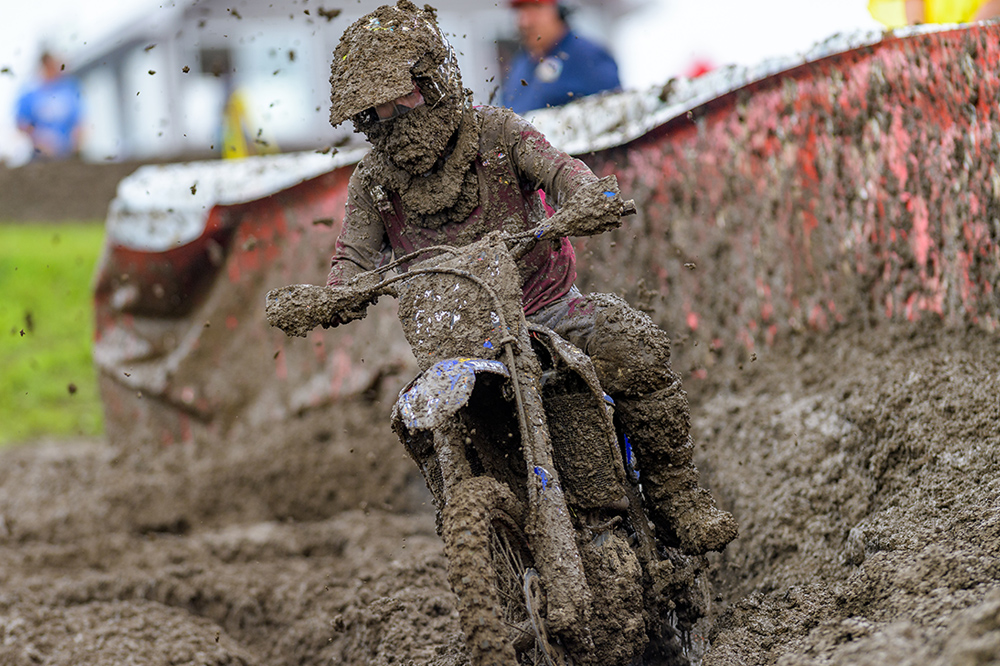 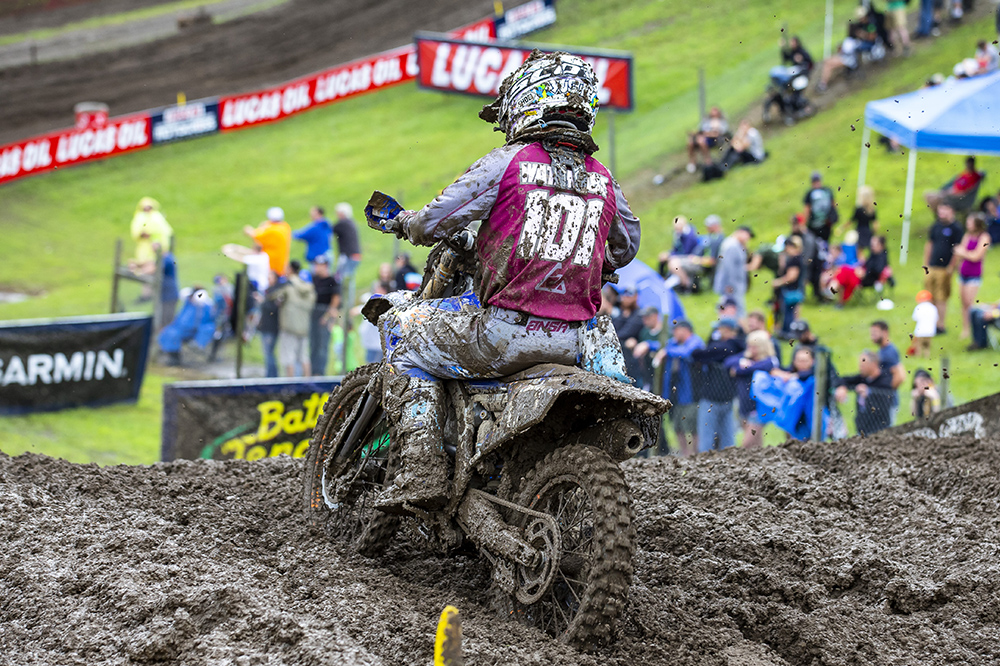 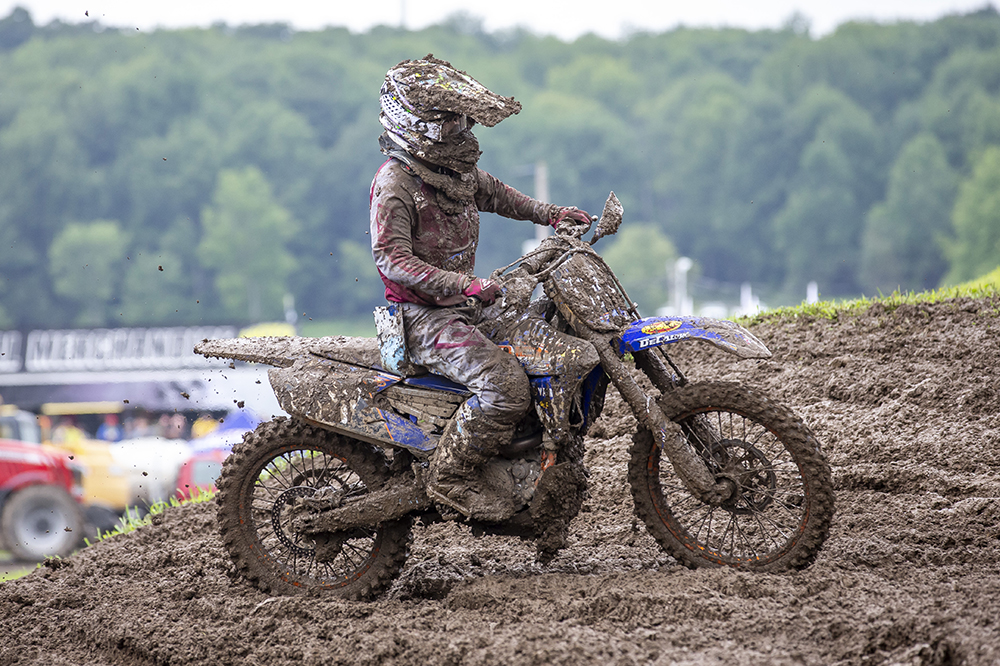 Challenging Conditions Make for Difficult Ride to 21st and 23rd

The start of Round 10 in Unadilla New York saw rain fall on Saturday morning, presenting the riders with the challenge of overcoming very tricky conditions. Results are normally unpredictable in mud races, however Watanabe was riding in fine form throughout the event.

He was put in the “A” group for timed practice this week, which turned out to be quite positive because the rain started falling just as the “B” group started their session which slowed down their lap times. He was 29th in the “A” timed practice but was lapping within one second of the six riders ahead of him, which illustrated that he had strong speed. The overall lap times continued to slow down as the weather got worse in the next practice session, meaning that Watanabe ended up in 29th position based on his first timed session.

The track was in poor shape by the time the 250 class headed to the start gate for Moto 1. The 450 class had already taken to the track for their races beforehand, and with the rain continuing to fall all morning the track was very wet and the ruts were deep and unpredictable. Watanabe was around 20th position coming into the first corner where he nearly crashed. Several riders fell or came close to falling on the first lap, and as the race went on the positions changed regularly in the difficult conditions. Towards the end of the race Watanabe was running in 18th place. Just after receiving the white flag to signal the last lap he had a small crash in an extremely muddy corner. He lost four places before he could re-join the race. He was able to catch and re-pass one of the riders in front to secure his final finishing position of 21st. It was a frustrating end to the race as he had been in position to take his best finish of the season.

By the time Moto 2 was set to start, the rain had stopped which gave the track some time to dry out, but that only made the conditions more challenging. When the gates dropped to start the race, Watanabe’s start was not as quick as it had been in Moto 1, which he later attributed to being overly aggressive and spinning the rear tire. He was around 25th coming through the first turn. The challenging track conditions forced Watanabe into several mistakes, as it did several other riders. He was locked in with the same group of five rivals for most of the race, and got as high as 21st at one time before being passed by Shane Mclerath which dropped him down to 22nd. He was passed again near the end of the race, which put him into 23rd, where he finished out the race.

"This was my first mud race this year. I made a lot of mistakes in Moto 1, but had a good feeling from the middle of the race to the end. A bad line choice cost me an 18th place finish on the last lap, so I was stuck in 21st. In Moto 2, there were many long ruts that I struggled in. I’m planning to give my best effort for the last two races."

"The weather conditions made for a very difficult track, but I was happy to see Yusuke have consistent results. A couple small crashes cost him a few positions today, however all things considered, it was a good day. He continues to recover from his arm injury and was strong all day. You can see him showing more speed and challenging riders that beat him early in the season."