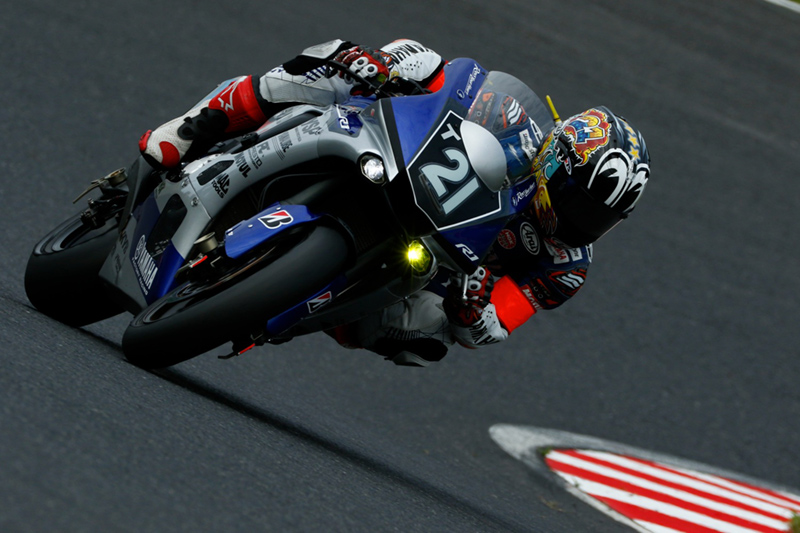 As the second day of action unfolded today in preparation for the legendary 38th "Coca-Cola Zero" Suzuka 8 Hours Endurance Road Race this Sunday, the Yamaha Factory Racing Team continued to impress with their dominant form in practice and qualifying.

Riders Katsuyuki Nakasuga, Pol Espargaró and Bradley Smith picked up where they left off yesterday at the top of the timesheets to set a blistering pace in the first free practice with a 2'07.888s lap. Smith endured a small crash in the final stages of the session, but it had no lasting effect on the bike or the rider. In fact, they then raised the stakes even further. As the sun shone down on Suzuka and the track temperatures rose, the trio used the YZF-R1 to its full potential in the first qualifying session, the only team to drop under the 2'07 mark with a stunning 2'06.877s lap.

The Yamaha Factory team continued their form in the afternoon with Nakasuga making the most of his vast knowledge of the Suzuka Circuit. Espargaró took a tumble on a fast lap near the end of his riding session whilst overtaking a slower rider but was luckily uninjured. Both he and Smith both made another step in improving their track knowledge with the team finishing in second, 0.419s from the front.

Fellow Yamaha entrants the Yamaha Austria Racing Team also kept their form from yesterday's practice, working hard to stay inside the top ten throughout the morning. Riders Broc Parkes, Sheridan Morais and Iván Silva rose to eighth in the free practice with a 2'10.383s before improving yet again in the first qualifying with a 2'09.730.

The afternoon saw Parkes deliver a stunning 2'08.973s lap that saw him enter the top five in the combined results for rider 1 group A. His teammates both rode a strong session on the YART YZF-R1, wrapping up just outside the top ten in 11th position at the end of the session.

Defending Endurance World Champions GMT94 Yamaha continued their hunt for the perfect set up ahead of Sunday's race. David Checa was clearly unfazed by yesterday's practice crash as he and teammates Kenny Foray and Mathieu Gines set about gaining further experience on the new tyres. They crew set a 2'11.177s in morning practice before picking up the pace to post a 2'09.871 in the first qualifying.

Checa, Gines and Foray kept up a consistent pace throughout the afternoon session, completing the qualifying by putting the GMT94 Yamaha YZF-R1 in 16th position.

This evening the Yamaha teams will be back on track for the night practice sessions. As today's results see Yamaha Factory Racing Team within the top ten, they will be back on track tomorrow to take part in the tomorrow's 8H Top10 Trial which will decide the first ten positions on the grid.

"I was able to get a lap time of 2'06.877 today even though the machine spec we were using was for the race and not for time trials. This really proves how well the machine has progressed. Yesterday, Pol [Espargaro] got the best time overall for the day with 2'07.282, and today I was out to set a top time, so you might say my lap in the 2'06 range was a show of my pride as a rider. I didn't take risks in order to get that time either; it was a natural result of the way all three of us are inspiring each other. For the second session, the track temperature had risen and I was on used tires, so the 2'08 times I ran made it a good simulation of the race. Of course, we're all motivated because we're competing this time as Yamaha's Factory team, and having two high-level MotoGP riders as my partners has created a great environment to compete in. These factors also bring pressure, but if all three of us do our jobs, I think a good result will follow naturally. We obviously will be going for pole position in the Top 10 Trial and we'll be focused on getting good lap times."

"The bike is working very well and the lap times are good. This is the good part; the bad part was that I crashed. It's difficult because in MotoGP when someone is slow, the difference is not this big and they usually go off the race line when they see you, while here it's the opposite, but I'm learning. I don't know what to expect for tomorrow, because here we ride short laps and tomorrow we have Superpole so we have just one lap, close your eyes and push until the end. It's a new experience and I will give my 100%. I'm having so much fun and I'm riding this bike with a smile on my face!"

"It was unfortunate I crashed this morning. I was playing around with the braking mark and lost the front of the bike. It's good to have made that mistake, because it shows how easy those kinds of things can happen in the race. We worked on doing a race run first because it was around the same time of Sunday's race, so it gave everybody an idea of what to expect. In the afternoon I wanted to push, and I was happy with my lap time 2'07,73, which is very close to Nakasuga and Pol's. I didn't want to take too many risks and was still third quickest, which is not bad. I was happy, because these were the first fast laps that I've done here, because before I've just been focusing on race pace. To have three riders within half a second is great, we are definitely the strongest team at the moment."

"Today Bradley [Smith] and Pol [Espargaro] each fell once, but the bike was heavily damaged in Pol's crash. Just as Pol had started one of his flying laps he came up on a slower rider at the Degner Curve and fell when trying to avoid him. Fortunately, there were no rider injuries, but now the team has a lot of work to do to repair the machine. Still, as the air and track temperatures began to rise during the first qualifying session, Nakasuga was able to record a lap time of 2'06.877. Then Pol clocked a 2'07.075 lap in the second session. Bradley had to run the second session on the main machine and was extra careful, but still managed to record a time of 2'07.308. So overall, everything is going well. There are no doubts about the abilities of our three riders, so one thing I want to do is make sure that they remember to keep a good margin of space when they come up on slower riders and to ride without taking unnecessary risks."

"We worked hard to create a good configuration on the bike today and our pace wasn't so bad. This is very positive, so we will see what happens tomorrow and find out what our rhythm for the race will be like. We didn't care about the results of the qualifying. It didn't matter what position we got, we have been working towards a good set-up for the race. We always went about it in this manner and we always get good results. It may be a pity that we start from fourteenth instead of sixth, but it's better to have it this way after qualifying than after the race!"

"We were a little disappointed about the results of the qualifying session, because we saw that the top ten would have been a possibility, but we decided before the session to ride a complete stint without a soft tyre. Even like this David rode 2'09.8 and Kenny a 2'10, so the pace is good. Of course we are competitive, so we still think about the position we could have gotten with soft tyres, but I still think it was a good decision. We have made a big improvement with the YEC electronic system, so we will use this for the race. We have good traction control and the riders have a good feeling. Yamaha Motor Co., Ltd. did a good job with these kit parts in just two months and this development is also good for the customers."

"The morning practice was pretty good, we didn't get many laps in, but we found a bike setting that worked for me, so we went straight in for the qualifier and felt pretty confident. In the first qualifying session I didn't find a good way, I tried a qualify tyre, but I didn't get the best from it. In the second session we started on a race tyre and changed the bike a little and then used the qualifying tyre at the end and I was pretty happy with the time. I didn't expect to do a 2'08 around here, because Pirelli have never been that fast and for us that was a good achievement. It's unfortunate that we were in the A group and the level was much faster than the B group else we would have made superpole. We missed it by one place, but in general the team is happy."

"I didn't expect this result or this lap time. We rode a 2'08 with Pirelli, while the fastest previous Pirelli lap was in the past a 2'11.9! I am really happy, we were one of the teams that didn't crash and had everything always under control. We didn't take too many risks and we are ready for the race. This year we have a bit less pressure than last year when we hosted the number one team. The team atmosphere is very good and there's always some time left for jokes. The riders are very nice and don't create a lot of extra work for us so I think we can also go to bed early tonight."