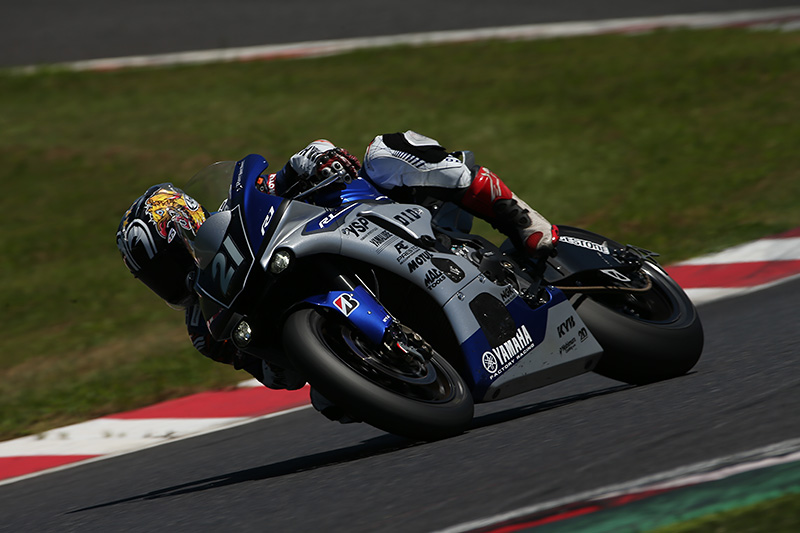 Yamaha began racing as a factory in the Suzuka 8 Hours in 1984. Three years later in 1987, riders Martin Wimmer and Kevin Magee gave the team its first-ever victory. Then in 1988, Wayne Rainey and Kevin Magee won Yamaha a second consecutive victory. Following that, Yamaha took wins with Tadahiko Taira and Eddie Lawson in 1990, and Noriyuki Haga and Colin Edwards in 1996. Since then, many Yamaha teams have aimed for the win at Suzuka but come up shy of victory.

This year, for the first time since 2002 (13 years ago), Yamaha will enter the Suzuka 8 Hours as a factory with the Yamaha Factory Racing Team. Yamaha has recruited a stellar lineup of riders from the highest echelons of road racing. Reigning All Japan Road Race Champion (Premier JSB1000 class) Katsuyuki Nakasuga will ride with Pol Espargaró and Bradley Smith, two fixtures of motorcycle racing's pinnacle class, MotoGP. It will mark the first time since Colin Edwards' participation in 2006 that an active Yamaha MotoGP rider will feature in a Suzuka 8 Hours event.

Team Manager Wataru Yoshikawa, who also heads the Yamaha factory team in the All Japan Road Race Championship, possesses an abundance of Suzuka 8 Hours experience. The machine will be the new 2015 YZF-R1. Although only in its first year of production, the bike is already making waves and garnering positive racing results around the world. Taking Nakasuga's championship-contending YZF-R1 as a base, the motorcycle the team will use is a full factory machine prepared specifically for this event.

The Yamaha Factory Racing Team is set to make their strongest challenge yet. The goal is clear and simple: claim Yamaha's first victory at Suzuka since 1996 (19 years ago).

Katsuyuki Nakasuga has won the premier JSB1000 class title in the All Japan Road Race Championship five times. He is contesting the 2015 season aboard the all-new 2015 YZF-R1 and currently sits at the top of the standings after four rounds. One of Japan's top riders, Nakasuga is aiming to become the first rider in the series' history to win the championship four times in a row and claim his sixth career title. He also serves as a development rider for Yamaha's YZR-M1 MotoGP machine and has also entered in five MotoGP races, notching up a career-best finish of 2nd place at Valencia in 2012.

For the Suzuka 8 Hours in 2005, Nakasuga was the third rider on Yamaha's top team at the time, but ended up not competing on race day. He made his Suzuka 8 Hours debut the next year in 2006. Nakasuga secured pole position for the race in 2012 and 2013, and scored his best finish of 4th in 2014. With this year marking his eighth time entering the event, Nakasuga said, "I will work together with the team to show that the new YZF-R1 is the fastest machine on the track, and I will do my best to bring an experience of the greatest possible Kando* to the fans that have waited so long for the comeback of the Yamaha factory team and a Suzuka 8 Hours victory." As the team's Japanese ace, Nakasuga will be aiming to bring Yamaha its fifth Suzuka victory and its first in 19 years.

*Kando is a Japanese word for the simultaneous feelings of deep satisfaction and intense excitement that we experience when we encounter something of exceptional value.

In 2006, Pol Espargaró made his World Championship debut in the 125cc class when he was just 15 years old. He also clinched the 125cc Spanish Championship title the same year. In 2007, he began racing full-time in the 125cc World Championship and stepped up to the Moto2 class in 2011. In his second season in Moto2, he secured four victories on his way to ranking 2nd overall. In 2013, he stood on the podium ten times—including six victories—and clinched the Moto2 title. In 2014, he moved up to MotoGP with the Monster Yamaha Tech 3 team and finished 6th overall. After this season's first eight races, he is currently ranked 8th.

Not only will this be Espargaró's first time participating in the Suzuka 8 Hours, it will also be his first-ever endurance race, his first time racing at Suzuka Circuit and his first time aboard the YZF-R1. However, he is undaunted: "I hope Nakasuga-san can help us with everything, which includes the circuit, the bike and the correct strategies that we need to have a successful eight hour race. It will be special and we will do our best to reward the faith that Yamaha has put in us." If Espargaró can fully exploit his riding abilities, he will surely be a driving force leading to a Yamaha win.

Bradley Smith finished 2nd overall riding in the 125cc Spanish Championship in 2005 as a member of the MotoGP Academy. The next year saw him racing full-time in the 125cc World Championship. In 2009, he excelled by notching two victories and standing on the podium nine times to finish the season ranked 2nd. Starting in 2011, he spent two seasons in Moto2 gaining experience before stepping up to MotoGP with the Monster Yamaha Tech 3 team in 2013. He scored his first premier class podium last season by finishing 3rd in Round 16 in Australia on his way to taking 8th place in the rankings. This season, he is currently 6th in the standings.

Regarding his first attempt at the Suzuka 8 Hours, he had this to say: "I will take this event very seriously as we are going to be part of the official Factory Team effort, so I will head to Japan with the full intention of getting a high scoring result for Yamaha." Smith is very much looking forward to riding the new YZF-R1 and many are expecting a strong showing from him on race day.

The “Positive Atmosphere” That Will Bring Victory