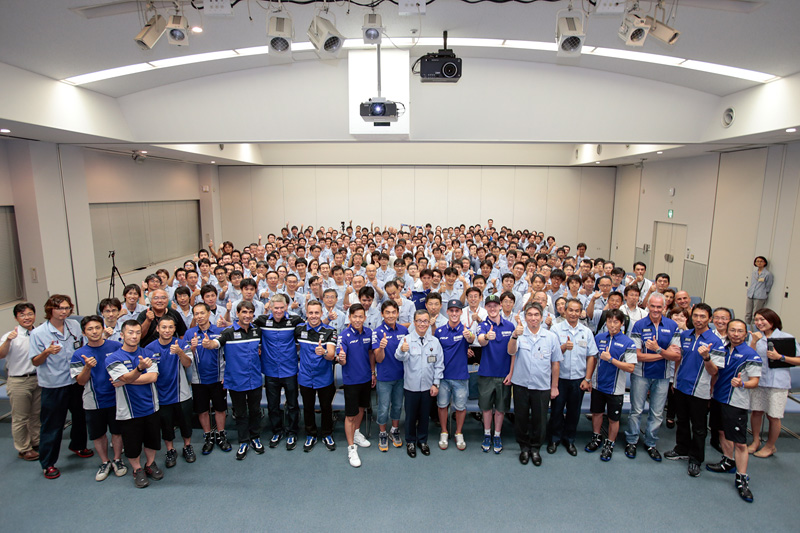 On July 21st, the YAMAHA FACTORY RACING TEAM and other Yamaha teams that will compete in the Suzuka 8 Hours gathered at Yamaha Motor headquarters in Iwata in Shizuoka Prefecture. The riders were quite busy as they spent time touring the Communication Plaza, Yamaha’s corporate museum, and the factory itself. To conclude their visit, they attended a special send-off event to cheer them on before the Suzuka 8 Hours.

More than 300 employees turned up for the event—far more than initially expected—and the venue was packed. First, Executive Vice President Takaaki Kimura addressed the audience: “We are united as a company for the Suzuka 8 Hours challenge, and to also exemplify our ‘Revs your Heart’ slogan, we are aiming for the win this year!” Having started the proceedings, the riders from the GMT94 Yamaha team, regular contenders in the Endurance World Championship, and the fastest Yamaha employee riders that comprise the “Iwata Racing Family” and “team R1 & YAMALUBE” teams took to the stage. The riders spoke about their feelings before the event: “I can really sense the strong spirit of challenge and passion in Yamaha’s racing efforts. As a member of the big Yamaha family, I’ll give it my best,” said one. “Beating our rivals as well as beating ourselves will be key. I’ll give the fans something to cheer about on race day!” said another.

Introduced next was the YAMAHA FACTORY RACING TEAM. Team manager Wataru Yoshikawa was followed by riders Katsuyuki Nakasuga, Pol Espargaro and Bradley Smith. The team was welcomed with loud applause as they took the stage. They had strong words to say ahead of the big event. Nakasuga pronounced, “We have the best team and we’ll definitely bring the winners’ trophy back with us.” Smith felt equally confident: “My dream of racing in the 8 Hours has come true. Both I and the machine are at 100% so we’ll be aiming for the win.” Espargaro remarked, “I feel very honored to be a part of the factory team. We want to deliver a victory to everyone at Yamaha.”

Following that, Koichi Tsuji, General Manager of the Motor Sports Development Division had this to say on behalf of all the Yamaha teams for the Suzuka 8 Hours: “For this event we have received the support of the entire company. As a team, we are deeply grateful for this support and are very confident. We will take everyone’s hopes and positive energy on board with us at the race as we aim for our first win since 1996 and prove how fast the new R1 is.” All of the attendees shouted “Let’s do it!” as the event came to a close.

Afterwards, the teams and riders lined up for commemorative photos. Having solidified their determination and come together as one to battle for the win, the riders received a heartfelt send-off for the Suzuka 8 Hours. After the event, they spent the night in Hamamatsu City and made ready for their journey. On July 22nd they headed toward the final battleground that is Suzuka; the race weekend finally begins on the 23rd.