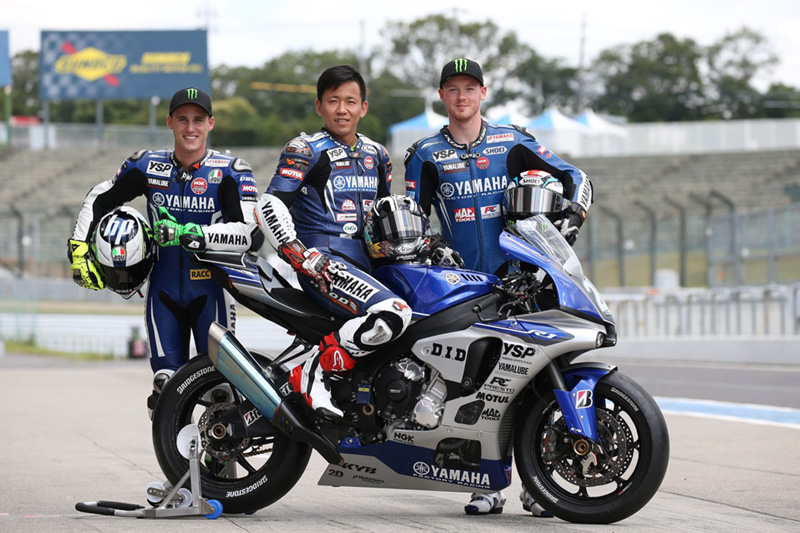 The Yamaha Factory Racing Team took part in a final two-day official testing session at Suzuka Circuit for the Suzuka 8 Hours to be held from July 23. After the first day of testing in fair weather, the dry conditions continued on day two for the 1.5-hour sessions in the morning and the afternoon, enabling the Yamaha teams to complete all of their scheduled testing successfully and head toward the upcoming 8 Hours race with confidence.

Throughout the two days of testing, Katsuyuki Nakasuga was evaluating things like tyre selection and fuel consumption, while his teammates Pol Espargaró and Bradley Smith concentrated mainly on verifying tyre performance and getting more familiar with the Suzuka course riding on the same machine. On the final day, they also rode the machine that Nakasuga had set up and had the opportunity to discuss set-up direction and work toward the settings they wanted.

During the two days of testing, all three teammates agreed that getting the machine to a point where all three of them could ride fast on it was the important thing, but they also found that there was not considerable difference in the directions each sought in the set-up. They eventually found a set-up they could be satisfied with and this gave them newfound confidence for the upcoming race. As proof of the good feeling they got, the team managed to record the fastest lap times on both days, with a 2’07.995 on the first day and 2’08.167 on the second. Their confidence was thus backed up by solid results.

During this session, the team also worked on simulating pit stops to polish their teamwork. In particular, this was the first time for Espargaró and Smith to be involved in pit work, but with the support of the team staff, who all have considerable experience in the Suzuka 8 Hours, they were soon performing their roles smoothly, demonstrating that they were reaching a high level of preparation as a team in areas other than riding.

As for the GMT94 YAMAHA team presently competing in the Endurance World Championship, this would be their first time working with the new YZF-R1 on Dunlop tyres, so they spent much of the two days working on improving machine settings. At the same time, this would be the first experience of using this new package on the Suzuka Circuit, so they focused on getting used to the feeling on the track and conducted a considerable amount setting changes by trial-and-error. As for their lap times, on both days they were in the 2’10 range, and like the regular and successful Endurance World Championship competitors they are, they made solid progress in overall team performance during the days of testing.

“During the tests this time we did mainly long runs to test fuel consumption and work on tyre choices, and we were able to decide on the tyres we’ll use for the race. Although we weren’t able to get lap times in the 2’07 range, we were concentrating on finalizing the machine settings, so I don’t consider the times a problem. More important was the fact that Pol and Bradley were able to run good times, and we feel that we ended the tests in good condition. It’s a new R1 this year, so it’s been very difficult to develop both a sprint race-oriented machine for the All Japan Championship as well as an endurance-oriented machine for the Suzuka 8 Hours. Nonetheless, we’ve been able to get the 8 Hours machine to a level virtually as good as the All Japan machine and set it up in a way that all three of us riders are able to ride fast on it; this is something we’re are able to do thanks to the factory team’s support. That’s why I’m grateful to Yamaha and to the team; I want us all to compete together and be smiling when the race is over. Personally, I’ve won four All Japan Championship titles, and in MotoGP I’ve been on the podium, but I’ve still never been on the podium here at the Suzuka 8 Hours. So this time, I want to show how incredibly fast the R1 is and get a podium finish. A pole-to-finish win would be perfect and this is a team I’m confident can do it. I’m really looking forward to the race.”

“MotoGP is a very tough competition where many of the top riders are racing and finishing two seconds from the top. In contrast, the 8 Hours is a race where there are many more riders and the gaps between them are 10 seconds or more. You have to understand this and accept it. And then you have to control yourself within those conditions, which is what makes it such a difficult race. And more than anything, you have to remember that Smith and I are rookies when it comes to the 8 Hours. The Japanese riders and foreign riders who already know this track well are very strong. Still, we have Nakasuga, who is a very fast rider, and during these two days the set-up of the machine has made good progress so that now Smith and I can run fast times. Also, the teamwork is very good, and I want to give 100% to help my teammates be as fast as possible. I’m just waiting for the start, and then I’m going to do my best for the team and for the fans cheering us on.”

“Since the three riders share the same machine in the Suzuka 8 Hours, I honestly wasn’t sure how well things would go. But, during these two days we found that the preferred settings for all three of us were quite close and we were able to get satisfying results in the tests, so in terms of conditions, I feel we’ve managed to get about 95% for both the machine and myself. The Suzuka 8 Hours is not an event where I compete alone; it’s an event where Nakasuga and Pol and the entire team compete together with me. So it’s important that we all think about what we can each bring to the effort and then do our best. For example, in MotoGP, Pol is my rival, but in the 8 Hours we’re working together as good teammates. But you never know what can happen in racing. There are worries and I will be nervous, but there’s also the knowledge that both my mind and body will be challenged in the race and I feel that I’m looking forward to that. This is a team that brings together a fantastic machine, riders and staff. Considering this, it’s only natural that the race should bring good results. I hope everyone will be looking forward to it.”

“The pre-race tests are very important in endurance racing. Especially this time with the new package, it’s been important to get a good grasp of the conditions of the machine and tyres and to improve the combination so that we’re able to run with a good rhythm. So that’s what we have focused on over these two days. As for the present conditions, we had six years of experience working to improve the previous R1, so the total package we have now isn’t fully on par with the previous one yet, but the machine itself has a very high level of performance, and I feel that we have been making steady progress in this test. The race is coming up soon, and we haven’t really set any target yet. We will be going all out to finish the race and get series points. But you never know what’s going to happen at Suzuka. There’s the possibility that we will get a podium finish like we did in 2012. In the race we will be showing the fans some hot battles. I’m looking forward to having lots of fans cheer for us.”

“This year there have been some positive changes in the R1. In terms of power and lightness, it is truly a machine with great performance. Still, it hasn’t been an easy start to this season. David had injuries and it’s also because we hadn’t been able to make the machine fully our own. And now, the Suzuka 8 Hours is going to be a very important race in terms of winning the championship. We need to come away from it with as many points as possible. In the test this time we weren’t aiming for top lap times; it was an opportunity for us to get experience that will help us bring out the fullest performance potential in the race. Most of the time was spent on the matching of the machine with the tyres, and getting myself used to the machine. I was able to come away with a good feeling and confidence. In the race I’m looking forward to racing in front of a lot of fans and I’ll be making every effort to get a result that will please them. I hope to meet everyone at Suzuka.”

“The R1 has magnificent potential, almost like that of a MotoGP machine. For the season opener we were still lacking data, so we weren’t fully prepared, but this test has given the riders a chance to get experience with the tyres, and we concentrated on machine set-up as well, so I’m confident that we will be able to show the progress we have made in the race at Suzuka. However, there’s still a gap between where we are now and the top teams we are competing against, but we will be battling for the win. That’s because our team’s motto is to help realize the dreams of many people. The fans at Suzuka have always loved us so I hope many people will come to see us in the paddock again this year, and cheer for us in the race.”