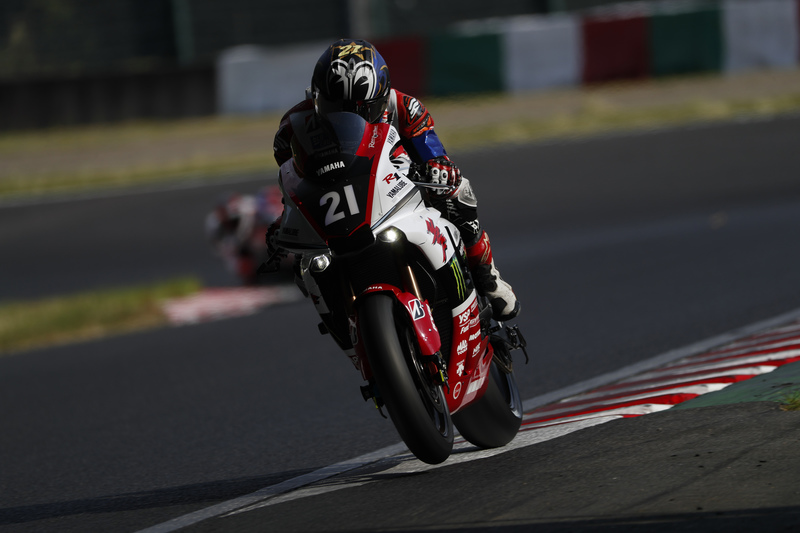 Qualifying got underway today in Suzuka ahead of Sunday's 2018 "Coca-Cola" Suzuka 8 Hours in relatively cooler temperatures than Japan has experienced with the intense heat earlier this week. The Yamaha Factory Racing Team continued their highly competitive form of the last three years, wrapping up the day with 2nd overall. The YART Yamaha Official EWC Team worked hard during their sessions to end the day of qualifying in 8th and Championship hopefuls, the GMT94 Yamaha Official EWC Team, completed a qualifying day that was plagued by red flags in 14th place. All three teams made a big impact on track riding in the special red and white livery to celebrate the 20th anniversary of the iconic Yamaha YZF-R1. 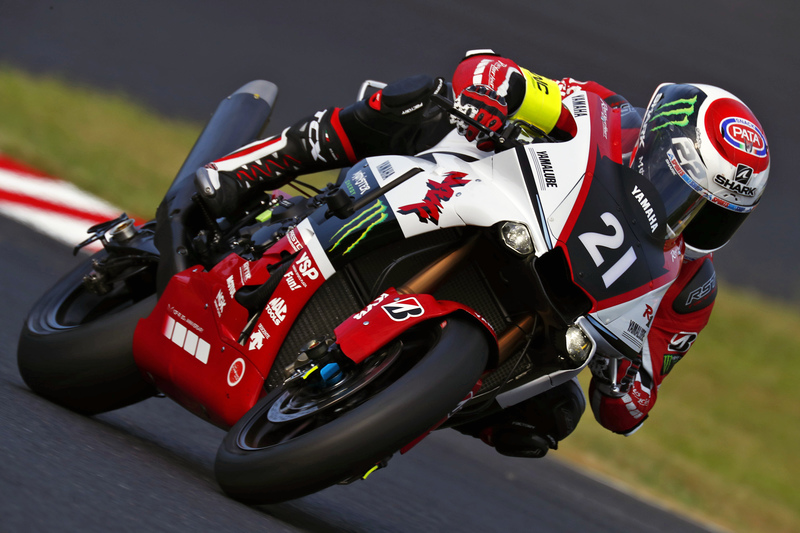 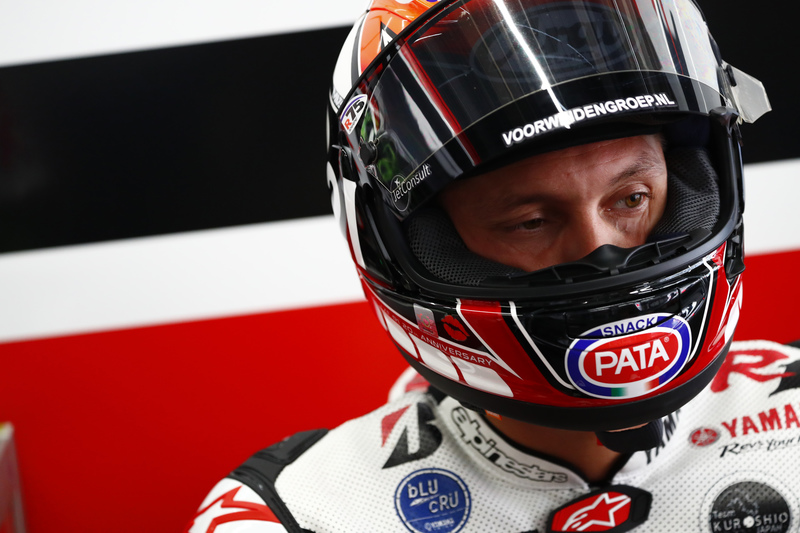 The Yamaha Factory Racing Team's Katsuyuki Nakasuga, Alex Lowes and Michael van der Mark hit the track with purpose in their first QP sessions, with Nakasuga the first out. The Japanese ace was immediately on the pace and under the 2'07 mark. As with all sessions his was interrupted by a red flag, but he was still able to calmly deliver a 2'06.854 lap to take 2nd in his heat, 0.079s from the top. Next up was World Superbike rider Lowes, who took little time to echo Nakasuga's performance, delivering a blistering 2'06.620 lap before the next red flag came out, completing his session in 2nd, 0.249s from the top. Van der Mark completed the team's outing in the third heat, finding space between more red flag incidents to lay down a 2'07.428 lap and take 3rd. The combined times of the team put them on top in the Overall 1st Qualifying Classification with an average lap of 2'06.967s, 0.129s ahead of 2nd place. 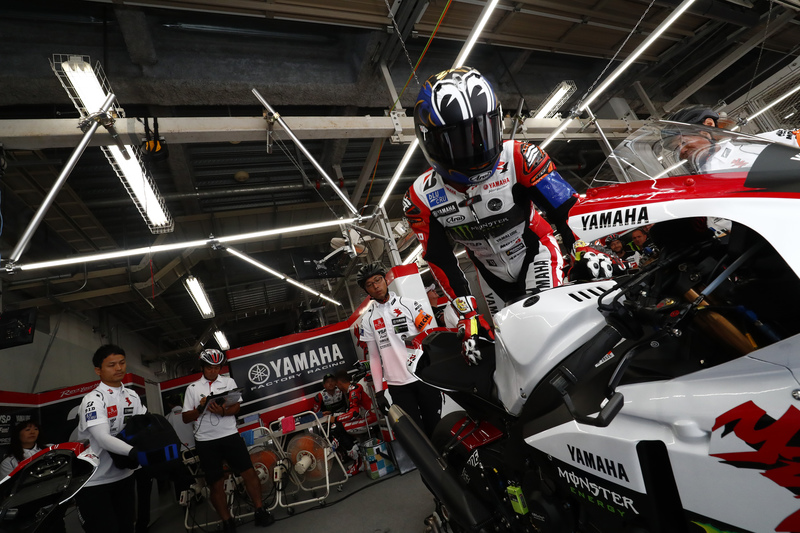 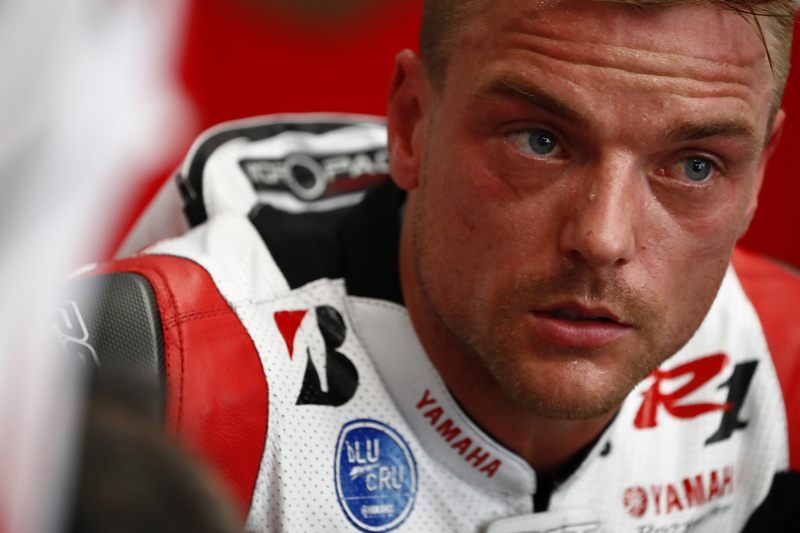 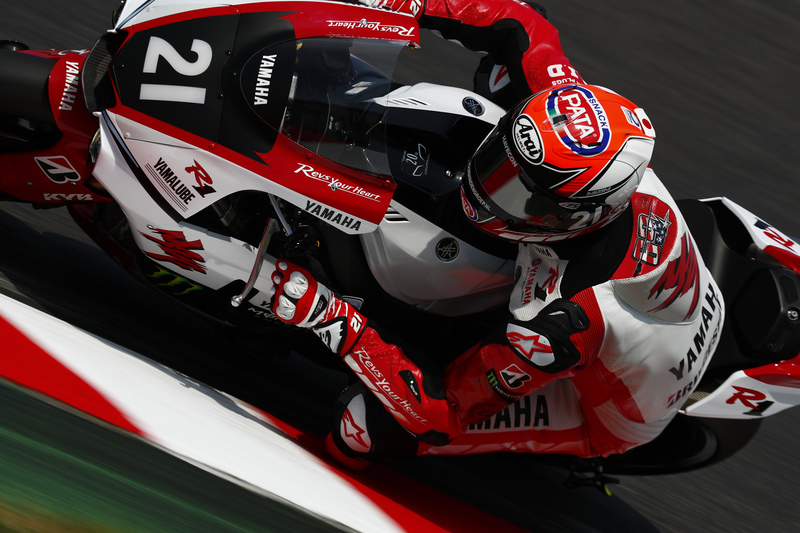 The second QP sessions saw Nakasuga straight to business again, putting down his fastest time of the weekend, a 2'06'236 lap to sign off his session. Both Lowes and van der Mark were able to keep up their pace from the earlier sessions, scoring a 2'06.620 lap and a 2'07.428 lap, respectively. The overall combined QP classification puts the Yamaha Factory Racing Team in 2nd, 0.322s from the top. 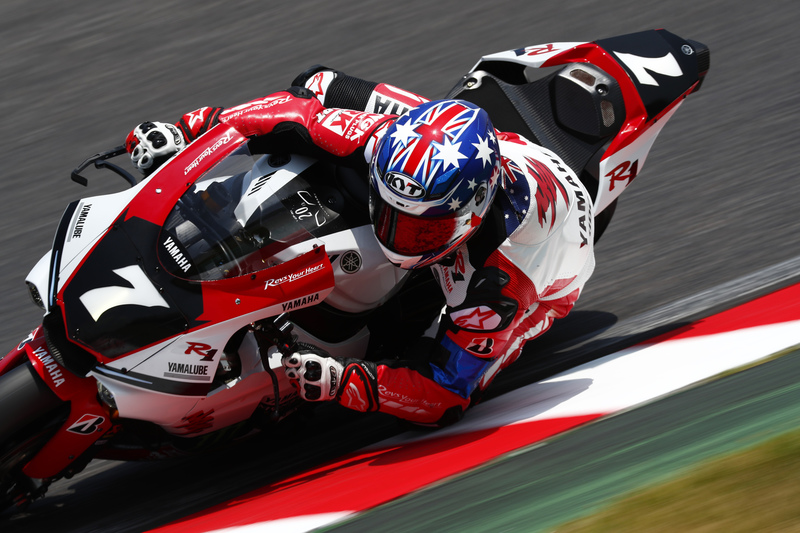 The YART Yamaha Official EWC Team's Broc Parkes, Marvin Fritz and Takuya Fujita also made the best of the broken-up QP sessions, with Australian Parkes the first man out. Parkes was able to keep focus to deliver a best lap of 2'08.208 for 7th place on the #7 YZF-R1. German teammate Fritz upped the pace a little, securing a 2'08.160 for 5th and local rider Fujita worked his hardest to deliver a 2'09.178s lap. YART's combined time for the first sessions was 2'08.515s, putting the #7 bike in 7th on the time sheet.

Both Parkes and Fritz opted to sit out the second QP session to allow Fujita the opportunity to get more track time in on new tyres. The gamble paid off, the team dropping to a 2'08.239 average lap time to secure 8th and a spot in the Top 10 Trial tomorrow. 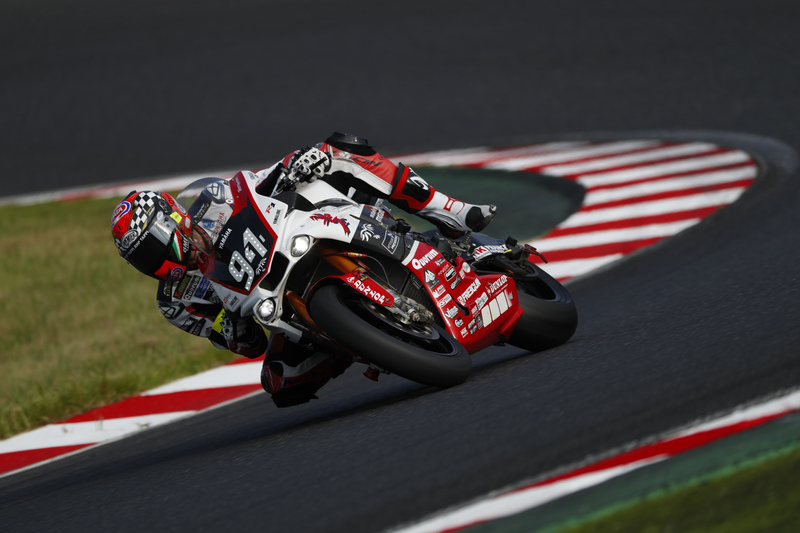 The GMT94 Yamaha Official EWC Team's David Checa, Niccolò Canepa and Mike Di Meglio experienced a day of mixed fortunes in their Suzuka qualifying efforts. Both Checa and Di Meglio were able to record their fastest-ever lap times around Suzuka Circuit, however third teammate Canepa's efforts to deliver a fast time were constantly troubled either by heavy traffic, red flags or chatter resulting from tyre issues. As a result a potential Top 10 Trial entry was finally not possible, placing the team in 14th overall with a best combined lap time of 2'09.296. "I did a 2'06.263 in the second qualifying session, but that was on tyres I'd used for four laps or so in the first session. Alex and Michael also used these tyres in their second sessions and all three of us were able to clock similar average lap times so we're ready. One of our rivals set an incredible lap time but what's important for winning the 8 Hours is the team's overall performance, the solid teamwork between the team staff and the riders. Our team has done everything we need to do so all that's left for us is to block out the noise and go racing."

"It was a good day today, obviously it's a long race, but it's nice for all the riders to have been pretty quick over one lap. We just need to continue working together to make sure we do good pit stops, good out-laps and in-laps, basically doing all the endurance stuff right to maximise our results on Sunday. I think we are a bit quicker than we were last year, but it looks like some of the other teams have made a big step forward so we have to focus on what we are doing."

"I think we had quite a good day qualifying. Of course, with the rules you have to play a bit with the tyres but I think Nakasuga-san and Alex made really good lap times and I think for myself it was also quite good. I think we can be happy going into the Top 10 Trial tomorrow because the race pace from our team seems to be really good which is what matters most in the Suzuka 8 Hours. I'm really looking forward to the race."

"I wanted to have our guys focus only on their riding during the qualifying sessions, but there were still some things we had to make sure of, so we switched to checking off those items during the second qualifying runs. Of course, we were able to take care of everything and our riders, team and bike are ready for the race. The weather is the only thing on our minds but I'd like to be able to set a strong time in the Top 10 Trial so we can be in the best possible shape for the race." "Today I was quite surprised because I've never ridden in the 2'10s and today I was always in the 2'09s! I'm quite happy because I missed the tests before this weekend, but you know sometimes you can do the test and then be slower at the race weekend. I'm also happy because my teammates worked well for the settings of our R1 and for sure the bike was good. My tyres were able to give me an improvement over a couple of laps, so I need to see if they will do the same for race distance with consistent feeling. I'm happy for my fast lap time but I'm a bit disappointed for my teammates as there were some issues with tyres for them that created chatter on the bike."

"Today was quite good I think, compared to last year I was able to improve my lap time. Last year was my first year and so to make that step was good. We were quite close to the Top 10 Trial; I think we missed it only by a little! I think my base is good, but of course here at Suzuka you need more experience to go faster. For the race we are not so bad if it is dry because we have a good rhythm, but if it's wet we should be faster like always. I hope we have a good race, it would be good for us for the championship."

"I'm quite satisfied with the team performance, my teammates and myself. We tried hard to stay in the top ten, and when you give 100% there is nothing to regret. Unfortunately in my second qualifying, I couldn't improve my lap time. I had a tyre problem so that was unfortunate. We are confident with our race pace, it's going to be a difficult race but we are playing for the championship so we have to try hard and stay positive and see what will happen after the chequered flag."

"David made his best lap time with the race tyre because we unfortunately didn't have enough qualifying tyres from Dunlop. Niccolò and Mike were not able to improve their lap times with the qualifying tyres because of a number of reasons, including traffic, red flags and so on, so the conditions were difficult. The good news is we have a very good pace with the race tyre, and it is okay to be a little disappointed because we expected to be in the Top 10 Trial and it was possible, so we expect to make a very strong race. Now we are focused on the race, we are happy with the race tyre so we are looking forward." 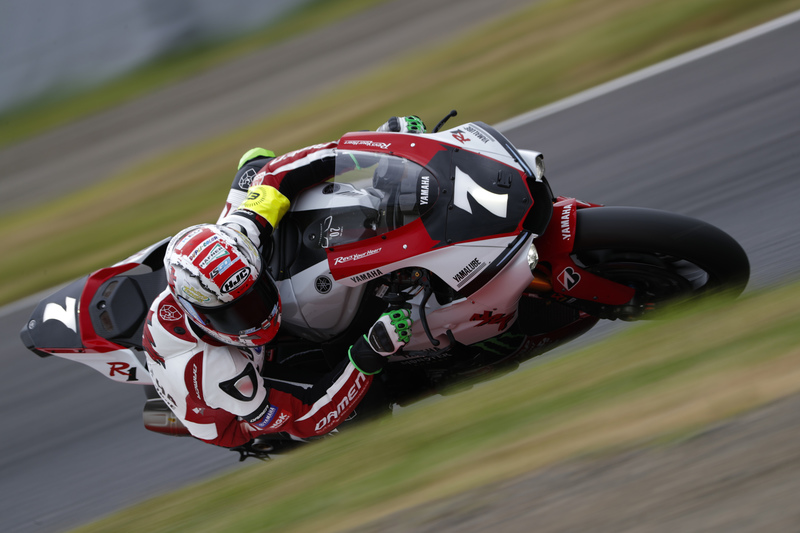 "It went pretty well today, Marvin and I only took part in the first QP session so we could save some tyres for the race and we saved another set of tyres for Takuya to try and bump him up a bit with his lap times and confidence in his second QP session. My qualifying session was OK. I didn't put one complete lap together, it was a little bit up and down with the splits and I was hoping for a little bit better, but in general I think we are in a good position and the main thing is that we got into the top ten so hopefully we can lay a good lap down in the Top 10 Trial superpole shootout."

"Qualifying was OK, I had two red flags so I came in once and as I came out into the pit lane it was red again. Then we waited and eventually I came out and had two really good laps and made my best lap time ever here with a 2'08.1. For me it was really good so I'm glad Fujita was also quick enough for us to to be in the Top 10 Trial tomorrow."

"In both qualifying sessions, I got caught up behind some backmarkers and slower bikes and wasn't able to get in a clear lap, so I wasn't able to lower my times. That left me a bit disappointed, so halfway through the second session I got a set of new tyres put on and went out again aiming for a 2'07.5. I had a clear track for just one lap but I set my best time of 2'08.3. My teammate Marvin hit a 2'08.1 and Broc clocked a 2'08.2, so with all three of us so close with our times, I think that really shows YART's strength as a team."

"We made the decision for Broc and Marvin to sit out their second qualifying sessions to save the tyres for Fujita because the conditions were much better in the afternoon so they both stayed in the box. They all were able to make good, similar lap times in the end to give us a strong average and secure us a place in the Top 10 Trial for tomorrow. Let's see what happens in that. The weather could be interesting also! Then of course we are also focused on the race, that is the most important thing."