In 2015, Yamaha Motor celebrated its 60th anniversary and debuted an all-new YZF-R1. For the 38th Suzuka 8 Hours that year, Yamaha brought back its full factory team—and its iconic #21 race number—for the first time in 13 years. Featuring All Japan star Katsuyuki Nakasuga and MotoGP riders Pol Espargaró and Bradley Smith, the team stormed to Yamaha’s fifth victory in the event and its first in 19 years since Noriyuki Haga and Colin Edwards’s win in 1996.

Yamaha faced the 2016 Suzuka 8 Hours by bringing World Superbike (WorldSBK) contender Alex Lowes into its line-up alongside Nakasuga and Espargaró. The team clinched back-to-back wins, a feat not seen since the repeat wins of Martin Wimmer/Kevin Magee in 1987 and Wayne Rainey/Kevin Magee in 1988. In 2017 at the commemorative 40th Suzuka 8 Hours, Yamaha fielded an all-R1 rider squad of Nakasuga, Lowes and Michael van der Mark and the three accomplished what had eluded every Yamaha team to date: three straight victories. While carving out a new piece of racing history, they also illustrated the true potential of the YZF-R1.

For this year’s 41st running of the race, the #21 Yamaha Factory Racing Team faces a new mission: to once again take the YZF-R1 to the top of the podium in its 20th anniversary year. And this time, that entails taking an unprecedented fourth victory in a row.

The challengers for this task will be the same as last year, Nakasuga, Lowes and van der Mark. Though the three are top-level competitors aboard their R1s in the All Japan and SBK classes, their real strength lies in the rock-solid teamwork that has come about through their mutual respect and trust in each other, built up during the process of taking three wins in a row.

Something else to keep an eye on this year will be the YZF-R1 itself. With the massive stock of data built up since the 8th-generation model’s debut in 2015, the R1’s reliability, fuel economy and outright performance—all factors vital to winning the Suzuka 8 Hours—have been improved for greater competitiveness. And to mark 20 years since its introduction, the factory machine will feature the 1st-generation model’s “YZF” and “R1” logos and red and white livery, as well as a special 20th Anniversary logo. The riders, team and machine will form united front in pushing for a historic fourth consecutive 8 Hours victory. 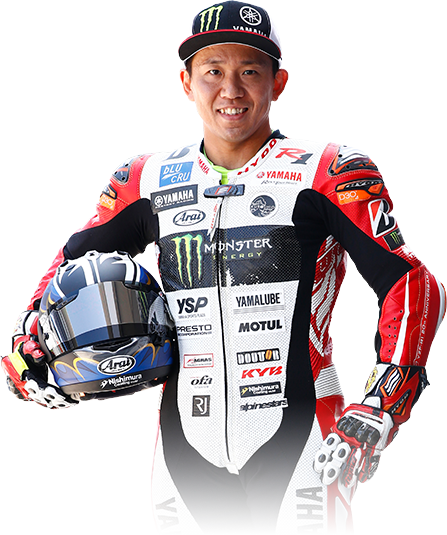 Katsuyuki Nakasuga is a legend in Japanese road racing and has won five consecutive championships in the premier JSB1000 class of the All Japan Road Race Championship, bringing his tally to seven overall. Although he took five wins last season, a spate of DNFs in the first few rounds meant that he finished 6th overall. This season, however, he sits atop the point standings with four wins in the five races held in the first three rounds, displaying dominance in the class once again.

For the Suzuka 8 Hours in 2005, Nakasuga was the third rider on Yamaha’s top team at the time, but ended up not competing on race day, and instead made his 8 Hours debut the next year in 2006. Since the Yamaha Factory Racing Team made its return in 2015, he has continued to serve as the team’s anchor—even when paired with the world’s top riders—and demonstrated his skills as the driving force behind the team’s three consecutive wins. Nakasuga’s skills and experience are what allow him to handle the intense pressure of acting as the team’s starting rider, bringing stability and confidence to the team and stunning rivals with his speed. His third consecutive victory last year made him the first Japanese rider and the second rider in 8 Hours history to ever achieve the feat. In this year’s 41st Suzuka 8 Hours, Nakasuga will be striving to place another jewel in the crown of the YZF-R1 to mark its 20th anniversary with a win, and become the first rider ever to win the iconic race four times in a row.

In 2013, Alex Lowes lifted the championship title in the highly competitive British Superbike Championship and moved to racing in the World Superbike Championship the following year. After competing for two seasons, he was selected to ride in 2016 for the Pata Yamaha Official WorldSBK Team, Yamaha’s first entry into the championship since 2011. Injuries played a major part in his first season with the team, leaving him ranked 12th. But in 2017, he made major progress by taking two 2nd place finishes and two 3rd place finishes for a total of four podiums to finish the season in 5th overall. This season, he has not only claimed his first-ever Superpole but also clinched his maiden win in the class, and currently sits 6th in the championship.

Lowes’ first foray into the 8 Hours was in 2015, after which he joined the #21 Yamaha Factory Racing Team in 2016. Alongside the talents of Nakasuga and Pol Espargaró, he skilfully swapped between attacking and maintaining position, making his presence felt on the racetrack and using his riding prowess to take two successive wins for Yamaha. In his second year with the factory team last year, he showcased his skills even when up against formidable rivals and shouldering massive pressure, running the final stint to the chequered flag and taking Yamaha’s third consecutive victory. With his own hat-trick of Suzuka wins and a record-breaking fourth for Yamaha on the line this year, he will once again surely bring much-needed steadfastness and speed to the team. 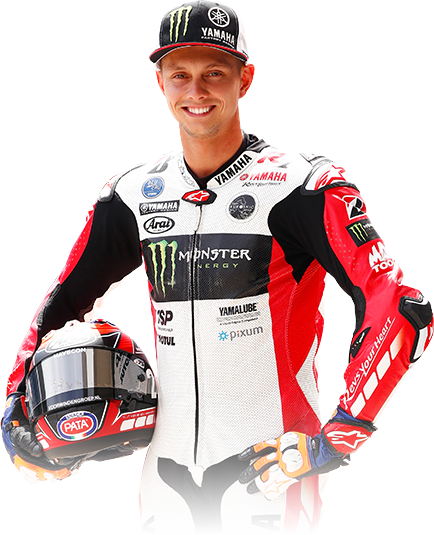 Michael van der Mark got his start in the European Superstock 600 Championship, where he honed his skills before moving up to the World Supersport Championship in 2013. He won the title in just his second attempt in 2014 and joined the World Superbike Championship—production racing’s premier class—the next year. Finishing 7th in his rookie year and then 4th the following year, he’s had a steady ascent to his status as a world-class rider and joined the Pata Yamaha Official WorldSBK Team in 2017.

In his first year with the team and riding the YZF-R1, he took 6th overall with two podium finishes but has had a breakthrough 2018 season so far, standing on the podium in Round 2 with 2nd, taking a double podium finish at Round 4 and then taking Yamaha’s first victory since returning to WorldSBK in 2016 and winning again in Race 2. His run of solid results sees him holding 3rd in the points.

At the Suzuka 8 Hours, he took a win in his first attempt in 2013 and repeated it in 2014. After suffering DNFs in 2015 and 2016, he was selected for the #21 Yamaha Factory Racing Team in 2017. As a previous 8 Hours winner, his ability to skilfully alternate between offence and defence while riding contributed to Yamaha’s third successive 8 Hours win. At this year’s 41st 8 Hours, he will not only bring his speed and experience to the team, but also bring the confidence he has gained in WorldSBK this season as the team seeks to claim an unprecedented fourth straight 8 Hours victory. 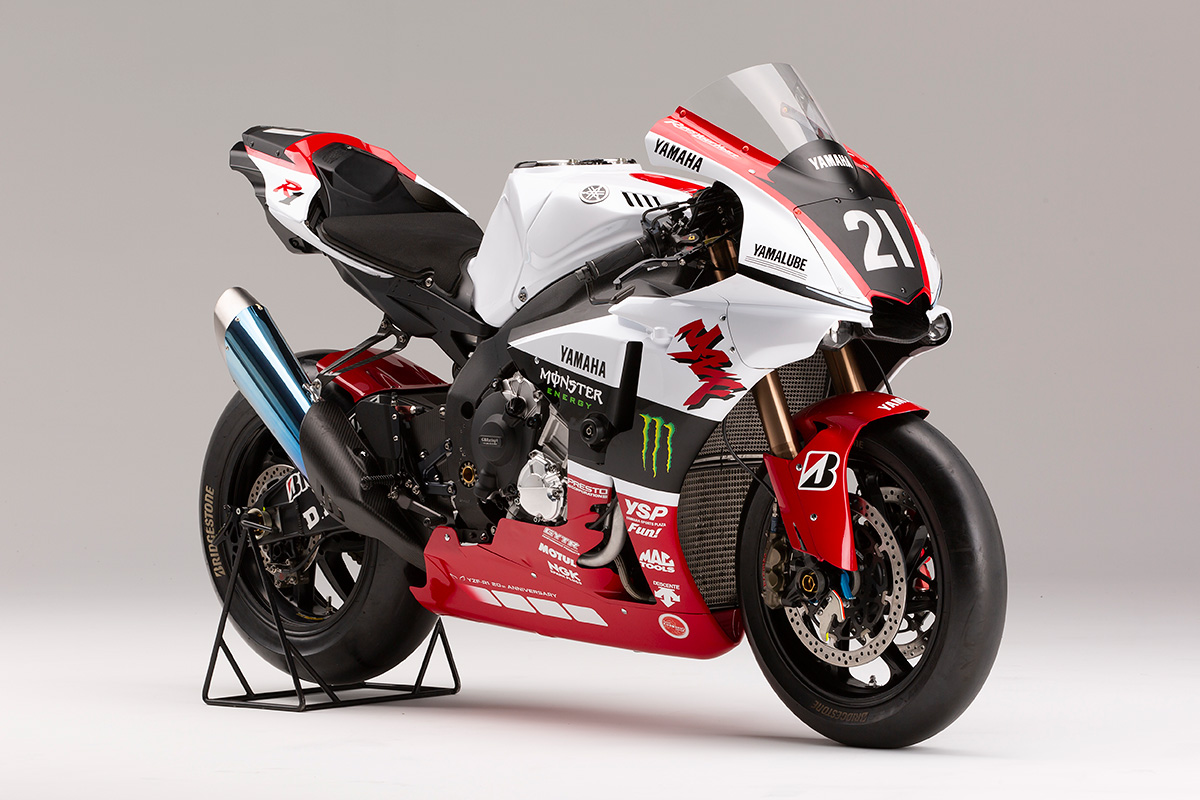