At the Yamaha Factory Racing Team’s private test at Suzuka Circuit held on June 27th and 28th, 8 Hours-spec YZF-R1s sat in the pit garage awaiting their riders. The sight was a picture of serenity, but at the same time, a keen observer could also feel the undeniable sense of confidence and strength emanating from the garage. 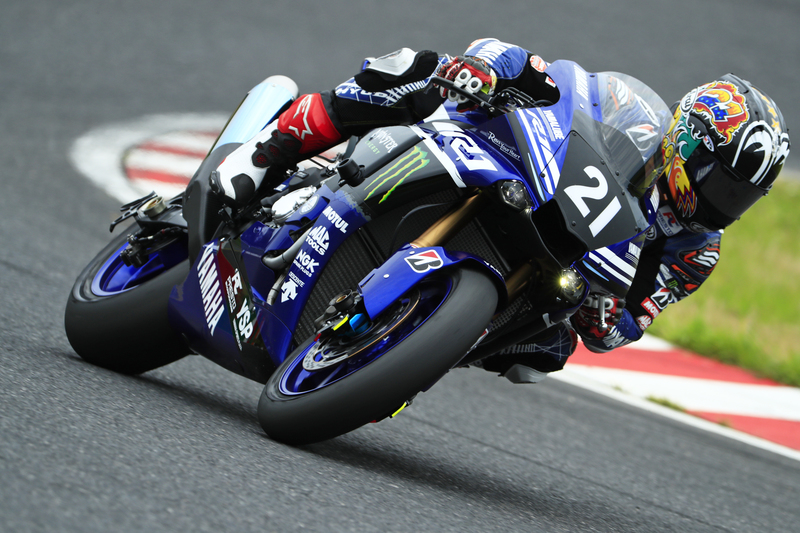 Last year, the Yamaha Factory Racing Team achieved a feat not seen in 28 years: back-to-back victories at the Suzuka 8 Hours. The same elite crew that pulled it off was together once again at the legendary track, preparing for their fight for a third consecutive victory this year. Katsuyuki Nakasuga, Alex Lowes and Michael van der Mark are all previous Suzuka 8 Hours winners, and in carrying out the planned two-day program at this private test, the team’s campaign is off to a good start.

The first day of the test saw the weather cooperate and the team was afforded clear skies and dry track conditions all day. Piloting the R1 this year are Katsuyuki Nakasuga, who could become the first Japanese rider to ever win the race three times in a row, Alex Lowes, whose steady riding in just his second 8 Hours entry last season played a major part in the team’s victory, and Michael van der Mark, who has won the 8 Hours twice in a row for a different team. The teammates used the test to assess both their feeling with the endurance-spec R1 and their own physical condition as they reeled off steady practice laps around the circuit. 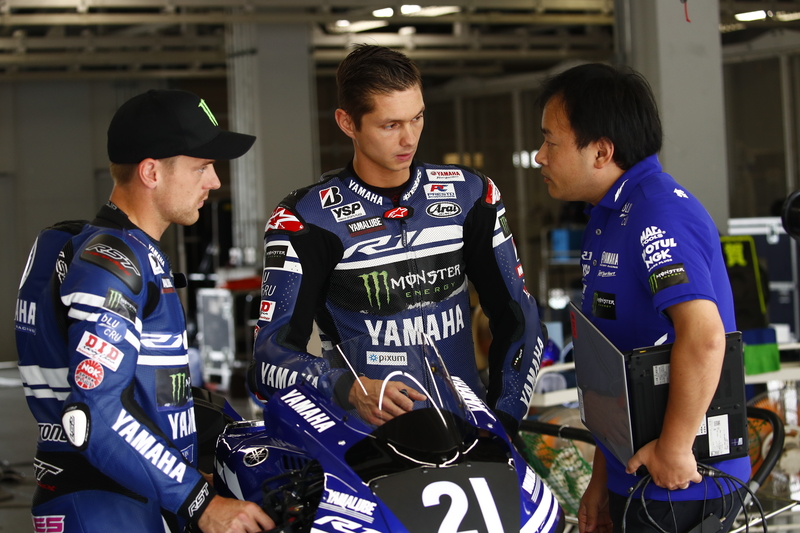 The test’s morning and afternoon sessions went smoothly, with the team adding small refinements to further improve the race-winning R1’s on-track precision. “This is my first time riding the 8 Hours spec R1,” van der Mark explained, and he kept himself busy asking the team staff and his teammates questions in an effort to get accustomed to the bike as quickly as possible.

On the second day of the test, the overnight rain had yet to cease and the morning session was cancelled. But while there were no bikes out on track, there was action in the pit garage as the riders chatted and deepened their friendship. “The ability to trust one another is the most important thing,” observed Nakasuga. While Nakasuga serves as the team’s pillar, his teammate Lowes—now in his second year with the Yamaha Factory Racing Team—adds a calming presence, creating a reassuring and welcoming atmosphere for newcomer van der Mark. Though it may not seem so, the communication that goes on during these bits of down time is also pivotal to the team coming together to work toward a win. 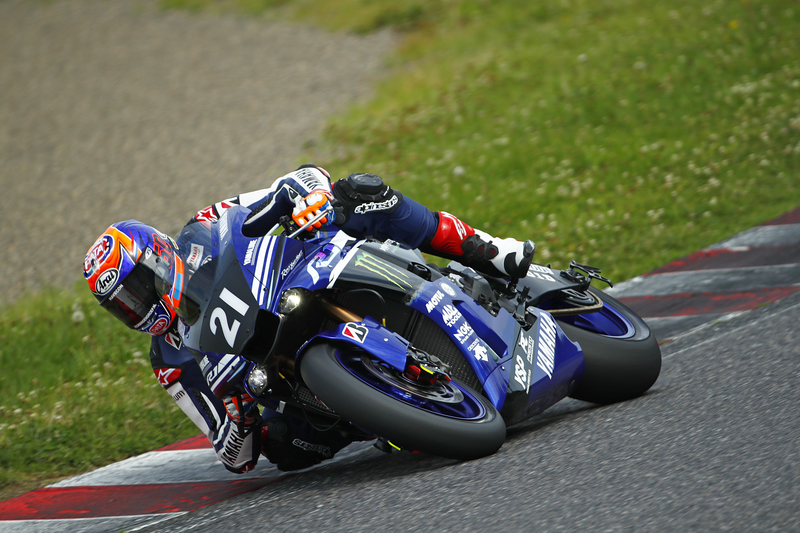 The rain thankfully let up in the afternoon and the strong rays and heat of Japan’s early summer sun began drying things out. Van der Mark took to the track just 30 minutes before the scheduled end of the test. Though track conditions were tricky with wet patches still around in some areas, van der Mark rode careful laps as he worked on testing the machine’s setup and riding position. 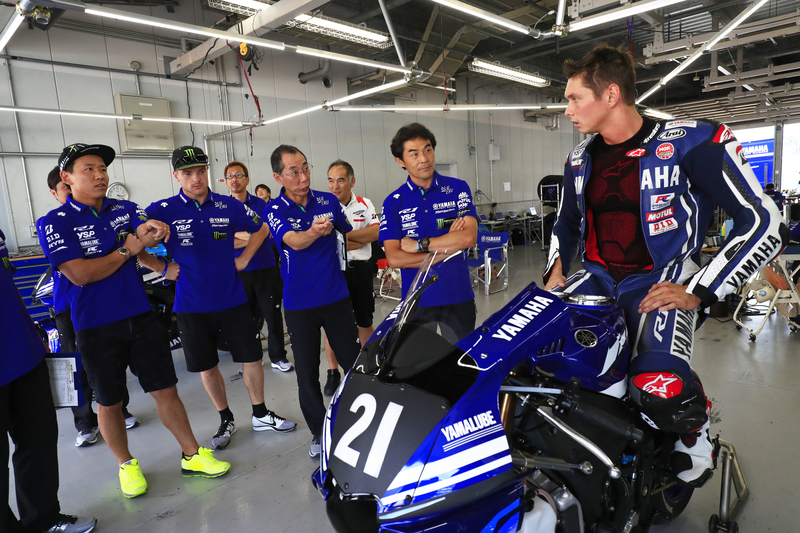 Finishing his run, Van der Mark pulled back into the pits where he was soon surrounded by Nakasuga, Lowes and several members of the team as they gathered around to hear his feedback. The group had a spirited exchange of information and ideas for making further improvements to the bike.

With a successful two-day private test kicking off their 2017 Suzuka 8 Hours campaign, a fully united Yamaha Factory Racing Team will be back in action at the first official Suzuka test from July 11th to 13th. “If we can ride to our full potential, we can definitely win it again,” says Team Manager Wataru Yoshikawa. His words reflect the team’s shared confidence as they will continue making further improvements and preparations to aim for the top step of the podium at the Suzuka 8 Hours on July 30th.

Keep your eye here on the official Yamaha Suzuka 8 Hours website as a variety of news stories and updates will be released in the coming weeks, about everything from the tests to the race itself.

“There’s a lot of talk about a third consecutive win, but for me I’m less focused on that and more focused on simply taking the win that’s right in front of us this year. My feeling doesn’t change from year to year; we’re always the challengers here. At this test, I understood firsthand that with Alex [Lowes], Michael [van der Mark] and myself, we have Yamaha’s best here in our team and that’s a big confidence booster. It’s my second time riding the 8 Hours with Alex and my first time with Michael, but we already have great communication and mutual trust. I think trust is the most important factor in taking the win, so all that’s left is to do what we have to do. Our tire selection process is going well and there are no issues with our settings. I’ll give my all so we can share in the joy of victory again after the race.”

“The test went really well; the more I rode the 8 Hours R1 the more I was able to get the feeling back and remember the layout of the track. The R1 goes really well around Suzuka, so even though we’re here to do some serious testing, I had a lot of fun riding it. The WSBK-spec R1 I normally ride is more set up for sprint racing, but the base feeling is the same so I’ve been able to get up to speed without any trouble. My view from the top step of the podium last year was fantastic with all the Yamaha fans and the bright lights, so I’ll be doing my best so we can enjoy that moment again. I’m looking forward to the rest of testing and to taking another win.”

“Until last year I’d always raced Suzuka for a different team, so this feels a bit strange [laughs], but Yamaha was a really strong team and I was also really interested in how it would be to ride the R1 here. This year I’ve been given the opportunity to race the R1 at the 8 Hours, so I’m really happy. Here at the test, as expected Nakasuga-san was really fast. He has so much experience with the R1, so Alex and I learned a lot from him. We confirmed that the R1 performs really well here at Suzuka and that we can run a very constant pace as well, and that’s really important in this race. The base setting is already very good, so we only need to refine it just a little bit. I’m getting along well with Nakasuga-san and Alex, so I’m really looking forward to the race.

“We want to get that third-straight win no matter what! We only have this opportunity thanks to the fact that we won the past two years, so we’ll really go for it and try to rewrite the record books. While our rivals are bringing their new models for this year, this is our third year entering with the YZF-R1. We have our wealth of experience and past results as our strengths, and if we can get 100% out of our package, I think taking a third consecutive victory is completely possible.
“This test went well. As the lead rider, Nakasuga showed his steadfast riding and boosted the morale of the team. Lowes is in his second year with the team, knows the 8 Hours very well now and contributes a lot to the upbeat mood in the team. Though it’s van der Mark’s first time with us, he had a solid one-off replacement ride last weekend at the All Japan JSB1000 race in Kyushu, so he’s already up to speed. We have a group of riders with unquestioned skill in our team and that’s extremely reassuring.
“Heading into the next test, I don’t think we need to make many changes to the R1’s base setting. But, testing is testing. In the actual race, conditions like the track surface temperature can quickly change. We had a great kick-off here and without a doubt we’ve start out on a positive note, but we can’t be content with ourselves just yet. We plan to keep our focus razor sharp right up until the race.”