GMT94 Make It Three Wins in a Row in Slovakia 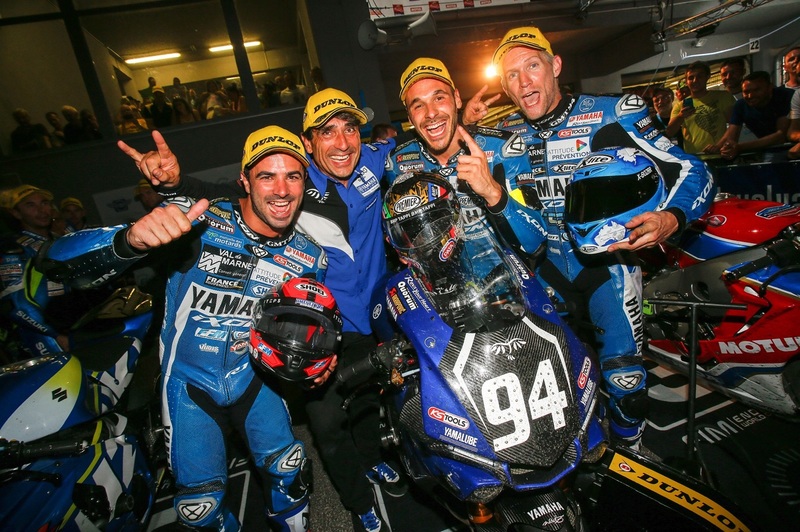 The GMT94 Yamaha Official EWC Team of David Checa, Niccoló Canepa and Mike Di Meglio made it three wins in the last three races as they romped to victory at the 8 Hours of Slovakia Ring, round four of the 2016/2017 FIM Endurance World Championship. There was another epic battle between the GMT94 team and the YART Yamaha Official EWC Team before a technical issue with just over two hours to go robbed YART of the chance to fight for victory, leaving GMT94 to win by over a lap, with YART recovering to cross the line in fourth. The Yamaha Viltais Experience team finished second in the Superstock class, and sixth overall, to secure the 2017 Superstock World Cup.

Throughout the weekend, just like at Le Mans and Oschersleben, it has been the GMT94 team and the YART team of Broc Parkes, Kohta Nozane and Marvin Fritz that had been the standout performers in practice and qualifying. YART secured a superb pole position on Friday, while GMT94 would start Saturday's 8-hour race from second on the grid. It looked as though there was going to be another epic battle between the two Yamaha teams, and it didn't disappoint with the two teams on virtually identical machinery, except GMT94 run with Dunlop tyres while YART use Bridgestone tyres.

GMT94's Niccoló Canepa didn't enjoy the best of starts when the action got underway at 1.30pm CET, dropping down to 11th and spending the first stint gradually working his way to the front of the field. He was up to third when it was time for the first round of pit stops, and GMT94 found themselves trailing the leaders YART by 25 seconds. As David Checa took control for the second stint, a safety car meant that YART's advantage at the front was reduced to nothing and it was effectively like starting the race again. When the Safety Car came in, David Checa made his move and took the lead. The Spaniard became involved in an excellent duel with YART's Kohta Nozane as the two swapped the lead numerous times during their stint. This theme would continue for the next few hours as the two Yamaha teams became locked together in a duel for the victory once more. 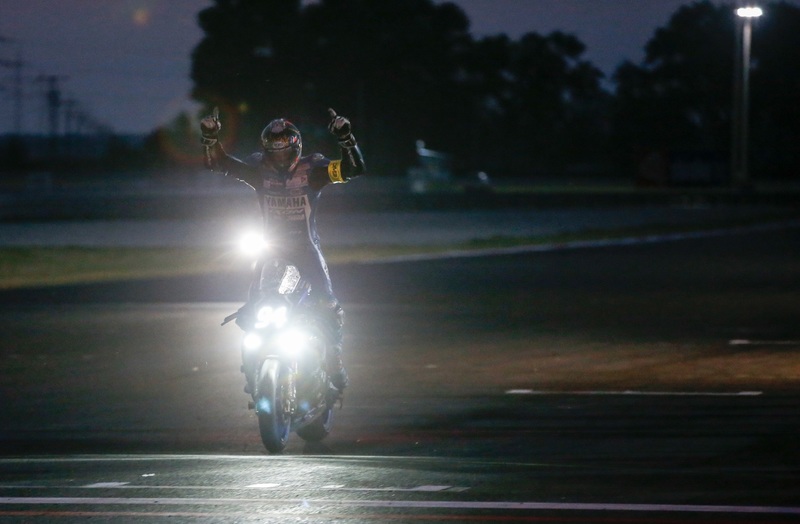 The lead changed hands at nearly every pit stop, with neither team managing to break away from the other and every rider showing good pace. With just over two hours to go, GMT94 were trailing YART by 19s, but then the YART team experienced a technical issue and had to come back into the pits for repair. Niccoló Canepa pounced on the opportunity, took over at the front and handed over to David Checa at the end of his stint with a lead of over a lap. The Spaniard managed this beautifully and handed over to Mike Di Meglio for the penultimate stint, before the French rider gave the bike to Niccoló Canepa to bring the R1 home and seal a convincing victory by over a lap from the team in second place to make it three wins in a row. Added to their victories at Le Mans and Oschersleben, this result means the GMT94 team are second in the championship standings with 131 points and have closed to the gap to the leaders to just one point with all to play for in the final round at Suzuka. 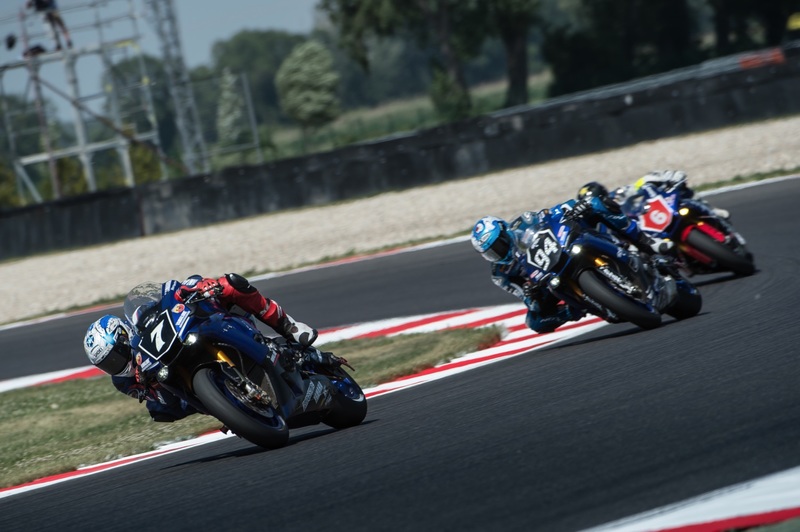 Broc Parkes had a better start for the YART team and was into second place after the first fifteen minutes. He immediately began to chase down leader Josh Hook on the FCC TSR Honda and within 30 minutes he had taken the lead for the first time in the race. Hook wasn't going to give up that easily though and the two Australians enjoyed an excellent scrap at the front before Parkes handed over to Kohta Nozane with a 3.8s lead. The Safety Car saw any advantage that Parkes had gained in the first hour wiped out and the GMT94 team took the lead from YART when racing resumed. Undeterred Nozane retook the lead and had opened up an 8.5s gap over the GMT94 team when he handed over to Marvin Fritz, although neither team could shake the other and another titanic struggle between them was in full swing.

Fritz was pushing hard, but he made a couple of small mistakes, running off track and letting the GMT94 team back into the lead. The German rider recovered well and after three hours, Parkes had retaken the lead for YART and set about opening up a small gap at the front. A couple of pit stops later and YART had a comfortable 19 second lead, but with just over two hours to go, Parkes experienced an issue with the rear of the bike and was forced to pit. After a quick check, he was sent back out, but the issue wasn't resolved and the Australian returned to the pits for more repairs to his R1. This effectively robbed the YART team of any chance they had of fighting for their first victory since 2009, the team re-joining the race down the field. Determined to finish strongly, Parkes, Fritz and Nozane all put in good final stints towards the end of the race to make sure that the YART team finished in a strong fourth position. This sees the YART Yamaha Official EWC Team now fourth in the championship standings with 105 points, 27 points behind the leaders with 30 up for grabs in Suzuka.

The Yamaha Viltais Experience team finished the race in sixth, but more importantly secured second in the Superstock class in the final race of their season to win the 2017 Superstock World Cup by just one point.

"It was a great race. I was always confident we could win it even when we were a few seconds behind YART. I always thought winning was possible and all the mechanics, the team and my teammates never gave up this idea, even if the World Championship was the main goal. I'm really happy to have won the race because it was what I really wanted!"

"It's fantastic! We gave everything during the race. The Dunlop tyres worked perfectly all the way. It was a tough race and thank you to Dunlop and the team for all the hard work. It's wonderful to be a contender for the world title."

"The fight with YART was pretty intense. I'm very happy because it is my third victory in a row with Yamaha and GMT94. We couldn't ask for more!"

"We can be very happy to be back in the fight for title. The interesting thing is we are now only one point behind SERT in the championship ranking. The team who will finish in front of the other will get the title. We will prepare for the Suzuka 8 Hours race with a lot of determination and motivation. The race here in Slovakia was very difficult. Temperatures were blistering. Riders, tyres but also the bike endured a lot. But in spite of that, we were able to keep a high pace. It was difficult because we knew that we were engaged in the title fight since our victory at the 8 hours of Oschersleben, but at the same time it's very hard for champions not to try and win the race, but today we could not take too many risks. Today the right behaviour was to keep an eye on the bike who was behind us in the championship and not on the YART team. It was also important to never give up, and to stay in the victory fight. We were able to do that. The fight with the YART team was one more time unbelievable, with some amazing overtakes. We had to be quick but at the same time think to the championship. Well done to our riders who were always fast, and didn't make any mistakes. We are very proud of our team"

"We are really disappointed considering we had a good pace all weekend and all three riders were really strong. To have that issue was disappointing because we had a better pace than GMT94 all weekend. It was the first time that we felt confident we could take the fight to GMT94, all three riders had a better pace and the Bridgestone tyres were working excellent in the hot conditions. That's racing sometimes, it happens, but hopefully in the future our luck will change and things will go our way one time. We will now put all our efforts into trying to secure the best result possible at Suzuka."

"The end result was not an indication of the true pace we had. We were having a great battle for the victory with GMT94 before we had the issue. I enjoyed the fight with David Checa at the front and the whole team was very strong here, so it is disappointing to come away without the victory, but we remain positive and look forward to fighting for the victory in Suzuka."

"We had a really good weekend, everyone has been very strong and fast. Broc and Kohta did really good first stints, unfortunately I made two little mistakes in my first stint, but I caught up to GMT94 again. We then took the lead and a gap. My second stint was really good, I opened up a 20 second gap to Di Meglio, but then we got the issue with the bike. We have to be positive, we had a good weekend, we have a really strong team and now we will focus on Suzuka to ensure we get the best result possible there."

"Today's result was not reflective of the effort the team put in and the pace we have shown all weekend. All of our riders were very fast, and we were the team to beat. We were unlucky a few times in the race, first with the safety car, then with Marvin's little mistake and finally with the bike. Once again, we had an excellent battle with the GMT94 team, but we felt that we had the pace advantage, plus with the Bridgestone tyres working so well in the heat, we were confident of winning. Unfortunately, it was not meant to be. Racing can be tough sometimes, but we can take many positives from our performance here in Slovakia and we will go to Suzuka with no pressure for the championship and just focused on winning the race."