Traversing a Flat but Demanding Road 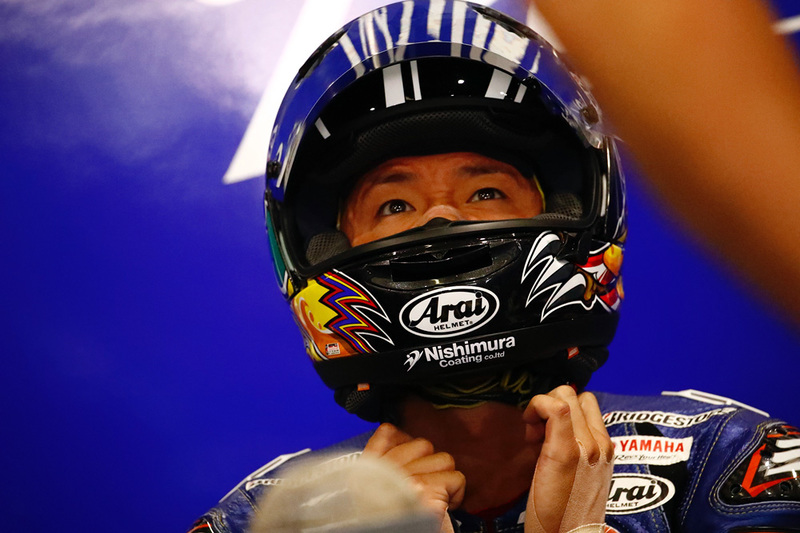 Nervousness and relaxation; enthusiasm and composure; bright smiles and tightly pursed lips. A diverse range of feelings and emotions make their way through the Yamaha Factory Racing Team’s pit box. This is a place where professionals work. There are no unnecessary movements in the actions of the team. Everything is readied or put away swiftly, without even the slightest delay.

However, the atmosphere doesn’t stay tense indefinitely and there is always a moment in which that tension is gently released—but it isn’t forced. The team’s absolute trust in its three riders—Katsuyuki Nakasuga, Pol Espargaró and Alex Lowes—brings a natural calm to everyone in the garage.

Lead rider Nakasuga’s words sum up the thoughts of his teammates Lowes and Espargaró, as well as the team: “We were able to win last year, but I don’t feel like we ‘beat’ all the other teams out here. We’re last year’s winners, but we’re at this year’s 8 Hours as challengers for the win like everyone else.” 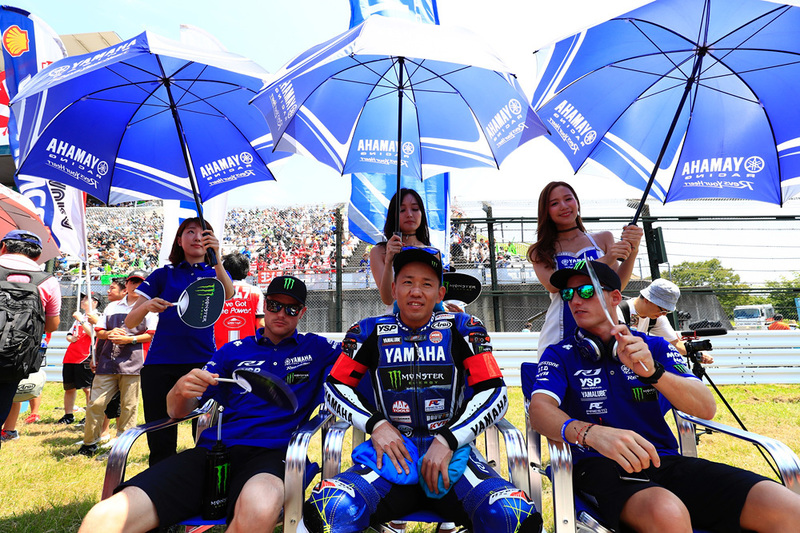 With the start of the race fast approaching, the three riders line up on the starting grid with smiles on their faces. There is a never-ending stream of requests for photographs, greetings from related personnel and hands being extended for a shake, and the three handle everything cheerfully but diligently.

The midsummer sun’s rays reflect off the asphalt as starting rider Nakasuga, clad in his leather racing suit, is already drenched in sweat. But his grinning face and thumbs up show that he hasn’t lost any of his motivation to the heat.

The race began right on schedule at 11:30 in the morning. Team Kagayama’s Ryuichi Kiyonari on the #17 bike got the best start and headed into the first corner with the lead, while Nakasuga finished the first lap in 4th position on the #21 YZF-R1.

The first few laps could be considered relatively calm. Nakasuga climbed to 3rd by lap two and then to 2nd by lap three, right behind Kiyonari. When the Team Kagayama rider responded by upping his pace, Nakasuga did the same; when Kiyonari’s pace dropped off, Nakasuga slowed down. They were lapping in the high 2’08s and low 2’09s as Nakasuga kept the gap to the leader at 0.1 to 0.2 seconds.

The YZF-R1 was smooth and stable around the track, and it was clear that Nakasuga could make the pass for the lead any time he wanted to. Just as the team trusts its rider, so too does the rider trust his machine.

The race was progressing in the same way it had last year. As Nakasuga rode the first stint, he was in no hurry to get in front of his rivals. With fuel consumption, race pace, tire life, track conditions and more to take into account, Nakasuga chose to keep a consistent pace rather than rush to the front. Though he stands at the top as the fastest sprint racer in Japan, he put on a fine display of the techniques needed to win an endurance race last year. 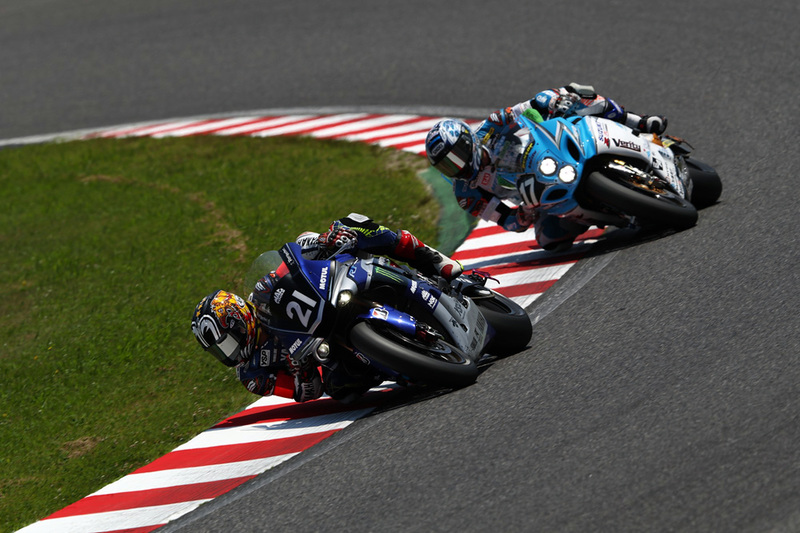 However, this year Nakasuga elected to pass his rivals earlier on in the race. Takumi Takahashi on the #634 MuSASHi RT HARC-PRO machine was beginning to catch up. Then on lap 18, when Kiyonari made a slight mistake and lost some acceleration out of a corner, Nakasuga seized the opportunity to come past and take the lead.

About one hour into the race, all the top teams returned to the pits en masse to make their first rider swap, Nakasuga included. The Yamaha Factory Racing Team showed off its exemplary pit work before sending Alex Lowes onto the track.

Though he was the team’s rival last year, Lowes was newly chosen to ride the YZF-R1 for Yamaha in the World Superbike Championship this year. As such, one could say he was still growing fully accustomed to the machine and his crash during qualifying was a very slight cause for concern for the normally rock-solid Yamaha Factory Racing Team. 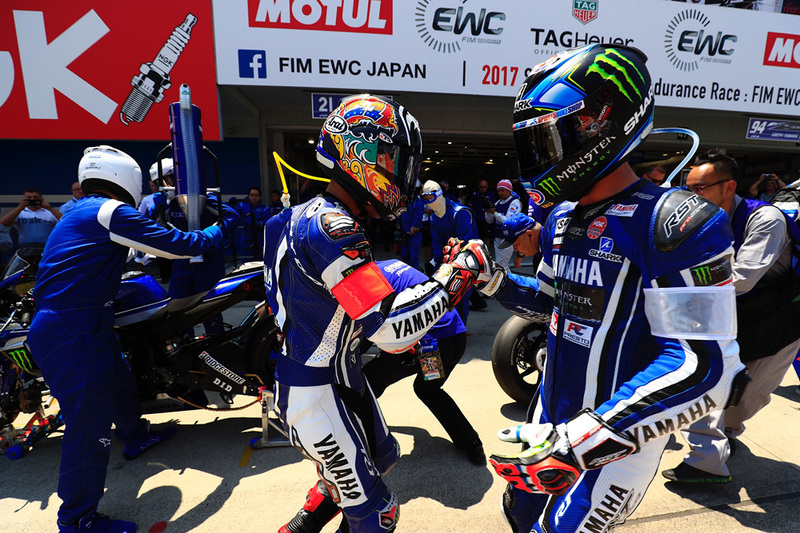 But as he raced under the blazing sun, Lowes showed a completely different facet of his skills, riding an incredibly consistent stint that differed greatly from his all-out qualifying sprint. Throwing his leg off the bike while braking for corners looked wild, but he rode smoothly and kept his cool in dealing with backmarkers. At one point he even passed two riders at the same time at the hairpin, but he left enough space open that there was never any danger.

There had been many openly predicting that this year’s 8 Hours would be another victory for Yamaha, barring any unforeseen issues. But on the other hand, that also meant that everyone in attendance was well aware that such issues can and do happen during the race.

Such unforeseen issues, which no team wants to experience, seemed to give the Yamaha Factory Racing Team a pass this year. The team’s main rivals experienced machine trouble and crashes one after another, dropping them back down the order. After taking the lead on lap 18, the #21 YZF-R1 lapped unchallenged at the front.

The team carried out a rider change about once every hour. Espargaró demonstrated the riding style of an active MotoGP rider as he hung his body off the inside of the machine at every corner, but by no means was he pushing too hard. His movements on the bike were calm and controlled, noticeably different to the dynamic, aggressive riding he had shown to take pole in the Top 10 Trial. Even so, his pace was clearly faster than the riders behind him and the blue YZF-R1 steadily began to open a gap.

Nakasuga took over from Espargaró at 2:30 in the afternoon for his second stint. He proceeded to pass backmarkers with care but didn’t let up the pace, making full use of the kerbs as he stretched the lead further. By the time the 100 lap mark was passed at 3:10, the gap to #87 Team Green in 2nd position had grown to 1’40.

But even so, there was no telling when an unexpected problem might arise. With only four hours separating the team and a dominating win from pole position, Nakasuga overran his braking marker. Though it all happened on-track and with only a slight loss of time, it was clear proof that he was riding at the limit. 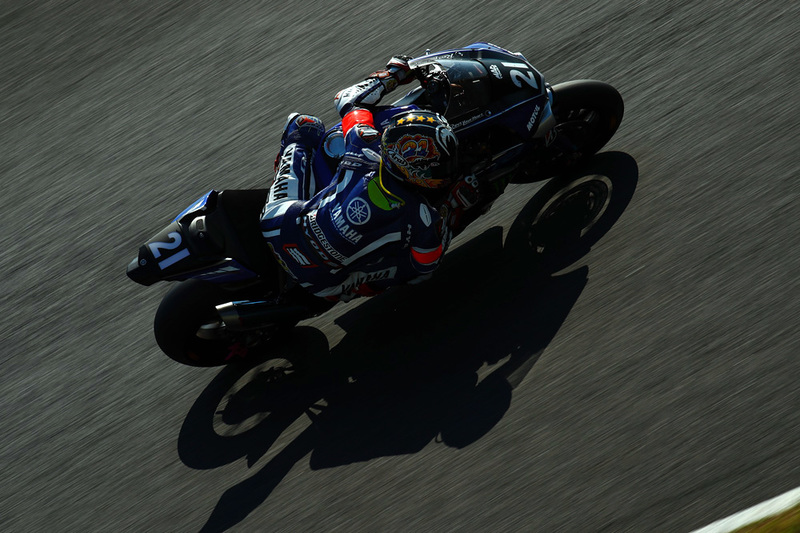 Shortly after that however, Nakasuga set the fastest lap of the race up to that point, as if to illustrate that everything—even overrunning a braking marker—was in capable hands.

Calling this year’s 8 Hours a “white-hot showdown” would be somewhat of an exaggeration; the race was unusually “calm” compared to recent years. It never rained during the race on Sunday or the lead-up to it on Thursday, Friday and Saturday. And though the crashes this year stood out, the safety car, which had a major effect on last year’s race by being deployed six times, did not enter the circuit a single time. Taking a broad view of the race, it all took place with a relatively steady flow, especially with the teams fighting for the top spots.

The circuit monitors mostly showed the battles between teams further down the order. As the day wore on and the asphalt was lit by an orange hue, the Yamaha Factory Racing Team’s YZF-R1 was shown on-screen less and less; they had already left the other teams too far behind. As Espargaró rolled into pit lane to end his final stint on the bike at 5:32 in the evening, he gave a big wave to the crowd in the packed grandstands. That moment was shown prominently on the video screens, but any accidents, problems or otherwise “thrilling” occurrences for the team were nowhere to be seen. 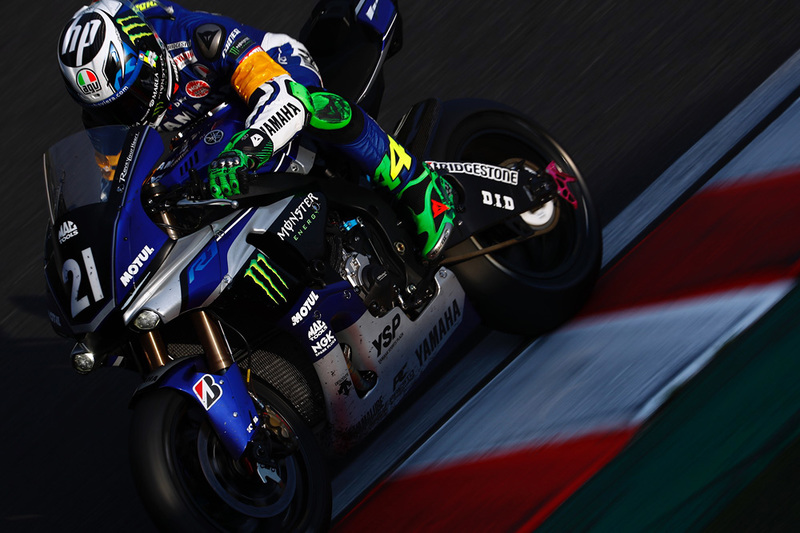 However, too much consistency can instead lead to anxiety about what might happen next. But for the Yamaha Factory Racing Team, nothing resembling anxiety or any other negativity was found as they approached their second successive 8 Hours win.

“It’s pointless if just one rider is fast. All three of us need to ride consistently quick, so we need to come together as a team and do our best to make that happen.” From the pre-event tests and right up until race day, all three riders had always made similar comments.

“You can win once on momentum alone, but taking back-to-back wins is extremely difficult.” The Yamaha Factory Racing Team learned a lot from last year’s victory. They learned how difficult it is to win and they experienced the amount of joy that comes with it.

Espargaró explained his desire for another win with an analogy: “It’s like giving a child a piece of candy. He’ll just end up wanting more.” That desire then becomes a vital driving force to battle hard in the race. But, in many cases in motorcycle racing, losing out to that desire is what leads to machine trouble and crashes.

It is a sport that relies heavily on the mechanical and technical side of things, but playing a far greater role is the mental side. And at the long, fast and grueling Suzuka 8 Hours, it’s the mental side that requires the utmost level of control. Track conditions can change, exhaustion builds from continuous hard riding in the relentless heat and backmarkers appear one after another on the racing line. Riders cannot be perturbed by any of this and must take it all in stride, maintaining their cool and concentration.

And the Yamaha Factory Racing Team’s three riders accomplished just that. It’s not as if there weren’t any obstacles, though. Without question, there were a number of mistakes made that were so minor that they weren’t visible to the untrained eye. The fact that these mistakes did not snowball into a major one may be down to sheer good luck. There was nervousness and relaxation, enthusiasm and composure, bright smiles and tightly pursed lips. The team’s skill in selecting the right one to fit each situation is what kept them on a straight path toward victory.

The final stint was left in Lowes’ hands. As the LED headlights on the YZF-R1 cut through the darkness that began to close in on Suzuka Circuit, he kept up a fast pace no different from the opening stages of the race. He didn’t speed up nor did he slow down. Even when passing backmarkers, it was without excessive caution but also without pushing too hard.

With only two tires touching the ground at any one time, the art of riding the innately unstable machine that is a motorcycle near its limits with the added difficulty of maintaining a steady pace is what these riders boldly accomplished at the 8 Hours. 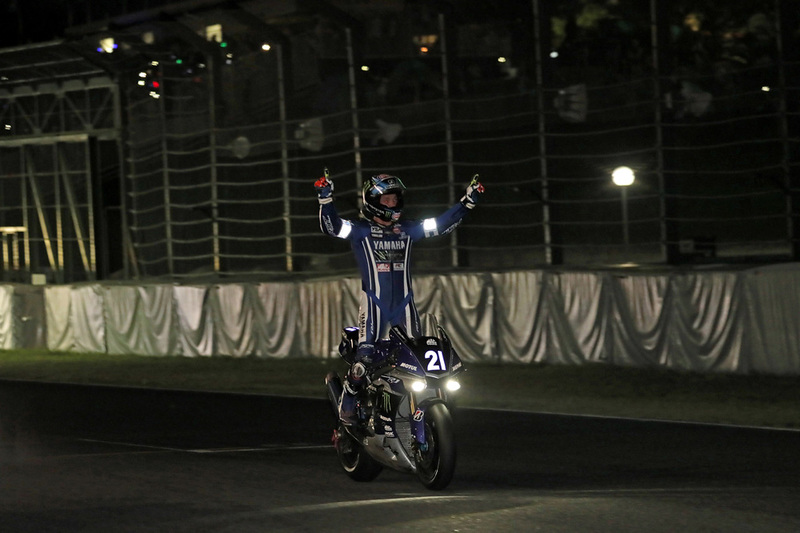 At 7:30 p.m., just as last year, the YZF-R1 took the checkers at the top of the timesheets. The twice-victorious riders erupted with joy, but at the same time felt the serenity that comes with a strong sense of accomplishment.

Mixed in with their pure delight was the deep sense of fulfillment and conviction that only those who continue winning can experience: we are the fastest once again. 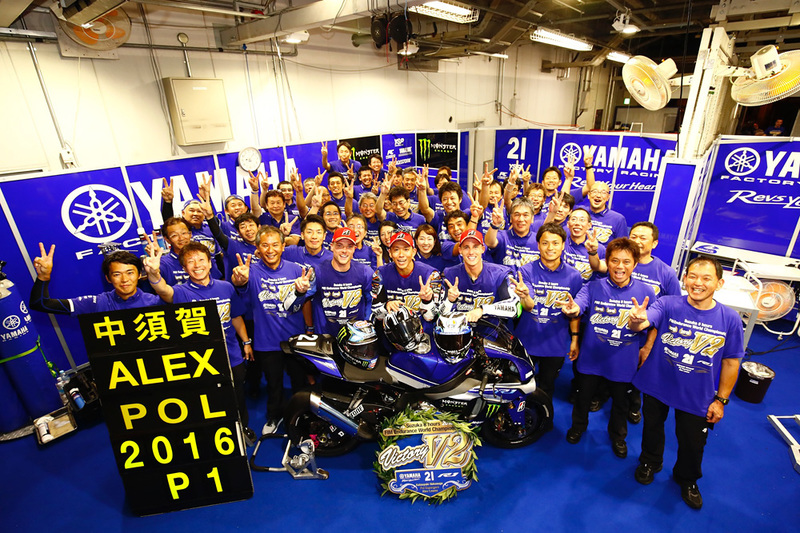