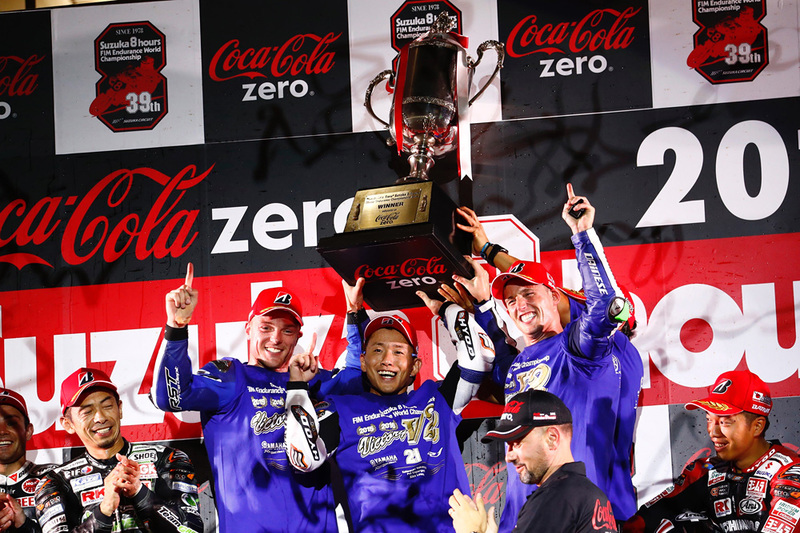 The Yamaha Factory Racing Team delivered a lap-perfect performance today to take their second consecutive Coca-Cola Zero Suzuka 8 Hours victory, the first consecutive two-win run for Yamaha since 1988. The YART Yamaha Official EWC Team came out fighting and also delivered, keeping the pressure on to the end to secure fourth in the sweltering Suzuka heat. GMT94 Yamaha proved their racing spirit, overcoming multiple challenges to bring it home in 14th position and wrap up the Japanese Endurance World Championship round.

Having dominated almost every practice and qualifying session leading up to today, Yamaha Factory Racing were at the front of the traditional endurance running start for today’s Suzuka 8 Hours. As temperatures rose over 30 degrees it proved to be a real endurance event for the team. All Japan JSB1000 Champion Katsuyuki Nakasuga was the starting rider, sprinting to his YZF-R1 to ride the first hour. Swift to his machine, he was third into the first corner, then dropped slightly to start the first full lap in fourth. As Nakasuga found his feet he was quick to start climbing back to second, tucking in less than two tenths of a second behind rivals Team Kagayama. The 2015 Suzuka winner settled in, keeping the gap to two tenths or less and the pressure high until taking the lead on the last chicane before heading in to lap 18. From there he was untouchable, building a lead until he came in at the end of the hour to hand the bike over to teammate Alex Lowes.

An impressive 17-second pitstop saw the British rider hitting the track in first place and picking up where Nakasuga left off, lapping under the 2’09 mark to stretch the lead even further. By the time he came in to hand the #21 machine over to Pol Espargaró, Lowes had built a lead of almost 20 seconds. The MotoGP rider continued his teammates’ pace, upping the pressure even further to be the only rider on track lapping under the 2’10 mark. By the time Nakasuga had returned to the track an hour later the lead was nearly one and a half minutes and growing.

The team continued to be untouchable on track, delivering a masterclass in team endurance riding to stretch themselves further and further into the lead. Espargaró took one more stint, riding two hours in total and Nakasuga a further one to make three. Come the seventh hour it was the responsibility of Lowes to make the final push, riding into the darkness to seal the team’s second consecutive Suzuka 8 Hours victory in stunning form. All three riders consistently outperformed the field for the duration of the eight-hour race, rightly earning the cheers from the nearly seventy-thousand fans in attendance as the clocked ticked down to zero. Lowes crossed the line a massive two minutes and 17 seconds clear of second place. Local hero Nakasuga also took the honour of delivering the fastest lap of the race with a stunning 2'08.411 on lap 105.

The YART Yamaha Official EWC Team’s Broc Parkes was the chosen man to take the first hour as the most experienced rider on the team. The Australian was quick to take off from his seventh place start position, moving up to fifth with no trouble. A flurry of activity saw him drop to seventh before handing the reins over to teammate Kohta Nozane.

The young Japanese rider proved an inspiration, holding his own in this and a further two, one-hour stints to keep the YART Yamaha not just in the top seven, but climbing to sixth before handing the bike over to teammate Takuya Fujita. The third rider didn't let the team down, keeping up a decent pace before switching back over to Parkes and Nozane to share the rest of the race between them. The two proved an inspiring combination, battling hard to reach fourth place and holding it to the line. The win brings YART up to third in the Endurance World Championship standings with a total of 60 points.

GMT94 Yamaha’s Suzuka 8 Hours experience proved to be more challenging than their fellow Yamaha teams with multiple setbacks arising to thwart their top-ten ambitions. David Checa was the first man to ride, but was forced to return to the pits in the opening laps with a technical failure on the rear wheel. A quick repair and it was then the turn of Niccolò Canepa to take up the challenge with the team having lost around 40 places. The young Italian, Checa and third teammate Lucas Mahias all fought like lions to bring the GMT94 YZF-R1 back into the game, pushing all the way back to just outside the top 20. Unfortunately a further electrical issue causing a loss of lights ate more valuable time but in true fighting spirit they never gave up, pushing even harder to finally cross the line in 14th position. Their results bring them valuable championship points, putting them sixth in the overall standings on 52 points. 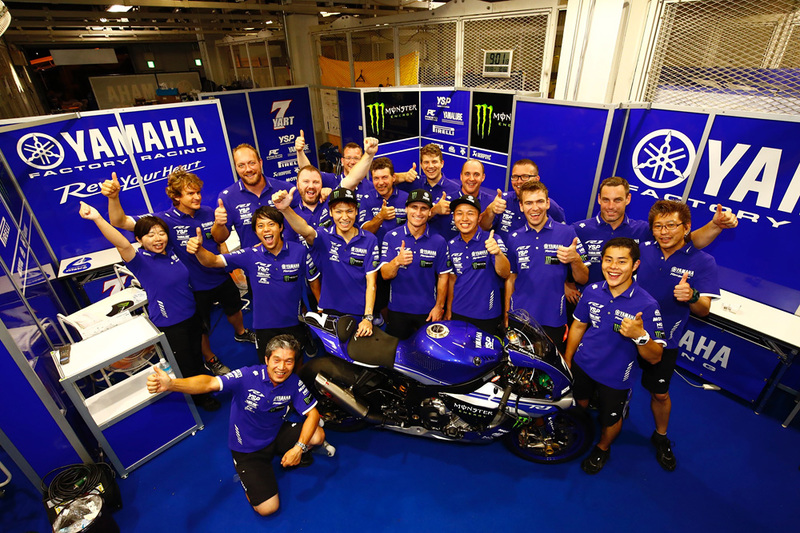 “Today was the hottest day of the week and it was really hard to ride for everyone. In my first ride I wanted to go further to the front but unfortunately the tyres weren’t the perfect match for the weather at the time. Towards the end I was able to bring the bike up to the front so finally I was happy. Yamaha did a fantastic job here in the 8 Hours and the bike is brilliant. I really have to thank everyone; the staff, the riders, and the fans for the great job they did.”

“I’m very happy and very satisfied with this win, for me, for Alex and for Nakasuga-san because we really deserved it. From the start of the test we have worked so hard to get the best for us three. After last year, to win two times with Nakasuga-san and one time with Alex is amazing. I’m sure Alex will complete the second one next year! I just want to say thanks to Yamaha, to all the people that support this fantastic team, because we are three riders but a lot of mechanics and other people work in the Yamaha Factory Team. Thanks so much to Alex and Nakasuga, they were amazing today, I can’t say anymore, just thanks!”

“Obviously I’m really very, very happy; this is the first time I’ve won this event. The whole week for me has been fantastic, it's a totally different experience to my normal racing championship and the atmosphere we have in the team and the relationship we have has been really enjoyable, both on the track and off the track. The feeling you get when you win is fantastic and it’s been a couple of years since I’ve felt that so I’m happy! I want to say a massive thank you to the whole Yamaha Factory Racing Team for inviting me here; all the staff and guys have been fantastic. Pol and Nakasuga-san have been fantastic teammates, they’re really fast which has made the job a lot easier for me so a big thank you to them and hopefully I’ll be back next year!”

“We spent a year doing all kinds of preparation so we could win the Suzuka 8 Hours again. And today, we ran the race just as we’d planned and were able to win for the second time in a row. The safety car didn’t come out and it never rained so it was eight hours of non-stop racing, but we recorded 218 laps and that’s a new record for the current course layout, so we’re really satisfied with our performance. This year, we were able to carry out the exact kind of plan needed in an endurance race because our riders as well as the team really came together to make it happen. To the fans that came to cheer us on and related staff, thank you very much for all your support.”

“Honestly we did not expect the result that we got. Kohta really stepped up today and we couldn't have hoped for a better result because we couldn't have done better than that. The top three were quite a bit further away so fourth was the ideal spot today. I had to do quite a bit of work, I rode half the race, but I felt like I needed to do it so I could finish in the dark and keep the gap because it was so close between fourth and seventh and we could easily have slipped back. It’s good for the championship points; it’s really close at the top so coming to Oschersleben things could be interesting. It's a track I like well and the bike works well there so we can have a go at the championship title.”

“I’m really happy with our fourth place, but I’m also very tired. I took over after Broc’s starting stint, and then my second stint was pretty good. But after that, Broc took over from me and I ended up riding after Broc again. My pace was all over the place by that point. I wasn’t able to concentrate while riding and I’m really frustrated about that. However, this was my first-ever 8 Hours so it was a great experience and I learned a lot. I found some things that I need to improve in my racing going forward. Really though, our fourth place was thanks to Broc, so I’m grateful to him and the team for this wonderful experience.”

“I only rode one stint in the race, and deep down I really wanted to ride more, but I had to stick to the team’s plan. But the fact is that I did ride in the race and that contributed to our top-ten finish today. I’m really grateful to have been included as a member of the YART Yamaha Official EWC Team this year, and the entire process, including all the pre-event testing, has been a great learning opportunity for me. I’d like to use the experience I’ve gained here in my racing and show everybody how much I’ve grown as a rider.”

“Our result today was fourth, but to us it feels like a win. The team worked really well. Especially Broc, who put on an absolutely amazing performance. His riding was perfect. I think our two young Japanese riders both gained a lot of experience from this weekend. In any case, our race today was perfect! We want to come here again and put on another flawless performance like we did today.”

“I gave everything today. This race was very hard for us and for the team. But now we must turn to the 8H of Oschersleben, where we won last year. I love this circuit and we have often succeeded there.”

“After our victory in Portimão last month, I really thought the podium was within reach. I am of course disappointed but delighted to have discovered the Suzuka circuit. I had a great race and I look forward to the next race in Germany.”

“In our misfortune I am still lucky. David Checa, Niccolò Canepa and GMT94 bring me seven points that consolidate my first position in the provisional world championship. I'm looking forward to Oschersleben to help them win another victory.”

“First I am sorry for the riders who have given everything. They did not let go until the last lap of the race. They demonstrated a level of riding that delighted the team. Their disappointment is great but they were incredibly motivated. I want to thank the team, and also Dunlop for the provided tyres; they deserved a different result. We aimed for the podium, but we finished the race in the points and that reduces our frustration. I congratulate the Yamaha #21 of Pol Espargaró, Alex Lowes and Katsuyuki Nakasuga for their second consecutive victory at Suzuka.”