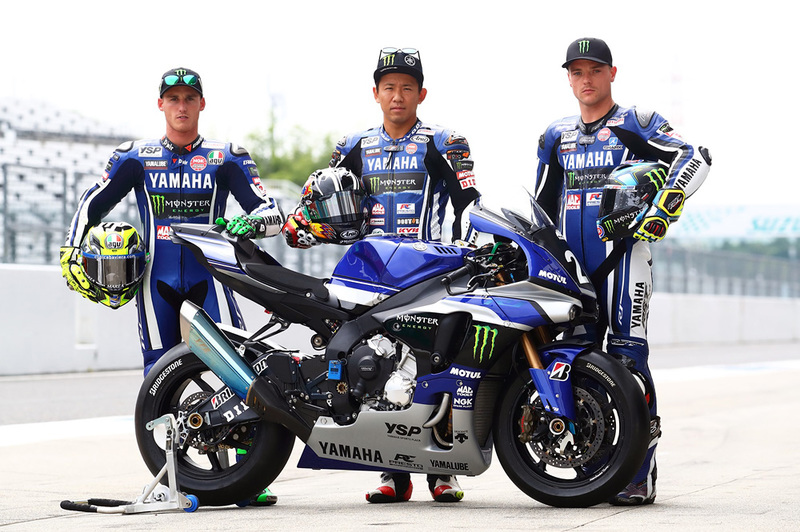 Last year, the Yamaha Factory Racing Team put on a brilliant display of speed and determination as they took a decisive victory in the Suzuka 8 Hours Endurance Race. They return to the site of that victory this year with the goal of securing back-to-back wins, something that hasn't been done by Yamaha for 28 years. To prepare for such a challenge, the team held a private test over the two days of June 29th and 30th at Suzuka Circuit. With one eye constantly on the overcast rainy season skies, everyone involved went about the test work on the track and in the pit with diligence and purpose. 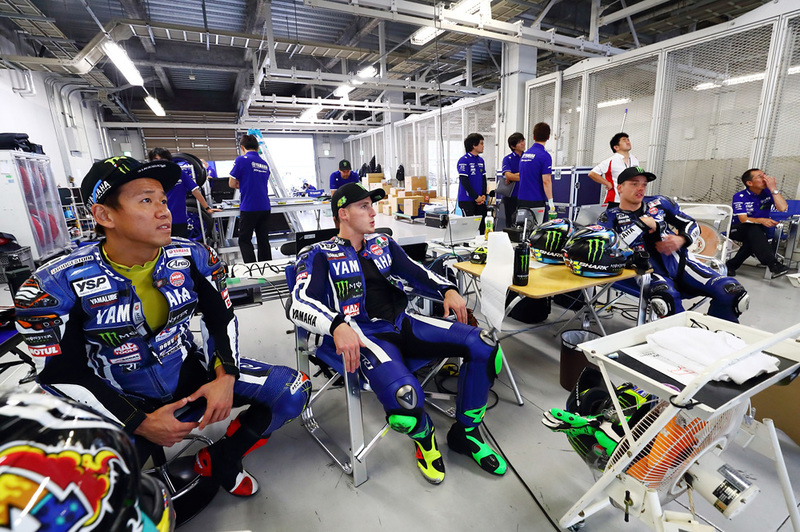 The rider lineup for this year's team features Katsuyuki Nakasuga, currently winner of consecutive titles in the premier JSB1000 class of the All Japan Road Racing Championship, and Spanish MotoGP regular Pol Espargaró. The two podium finishers of last year are joined this time by British rider Alex Lowes, who currently competes in the World Superbike Championship, to complete a three-rider lineup.

On the morning of June 29th, the first day of the test, track conditions were dry. All three riders got to work checking out the YZF-R1, the course, and their own physical condition as they steadily ran lap after lap. But rain came just after noon, effectively cancelling the planned afternoon session. Even so, the riders were able to gather enough valuable data and feedback to make it a productive first day overall.

The morning of the second day (June 30) saw ominously dark clouds looming overhead and, sure enough, the track would at times be wet during the day. With conditions as they were—neither fully dry nor fully wet—it would have been difficult to complete the entire schedule planned for the test sessions. At the precise moment the first session was set to get under way, it began to drizzle lightly. This meant that the riders began their session on standby in the pits, hoping for conditions to improve.

For team mood-maker Pol Espargaró, this private test would be his one and only chance to get riding time at Suzuka before the 8 Hours race, so he decided to head out on track despite the uncertain conditions. He was eventually joined by Nakasuga and Lowes, who put in solid laps as they kept an eye on the rain and the track surface. The air of intensity as the riders and crew practiced a number of pit stops, as if they were actually in the middle of the race, provided a glimpse of their strong determination to get everything right. 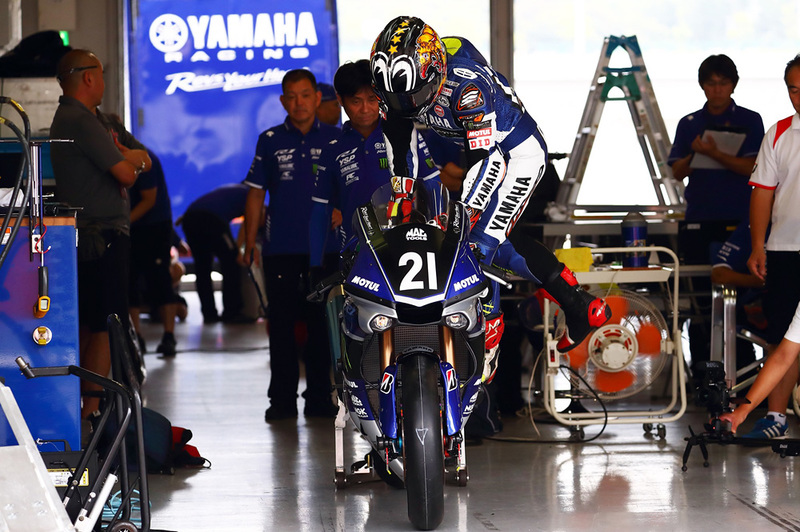 Although there were spots of rain during the afternoon session, the track surface just barely remained dry for the entirety. Nakasuga utilized his wealth of YZF-R1 riding experience to anchor the team, as he, Espargaró and Lowes discussed the finer points of machine setup between stints on the bike. The riders were forced to stand by in the garage once again as rain fell 30 minutes before the end of the session. But, the rain stopped with fifteen minutes remaining, giving the riders one last and brief chance to put in a few laps. They worked on machine setup right until the very last moment of what proved to be a very fruitful two days of testing. 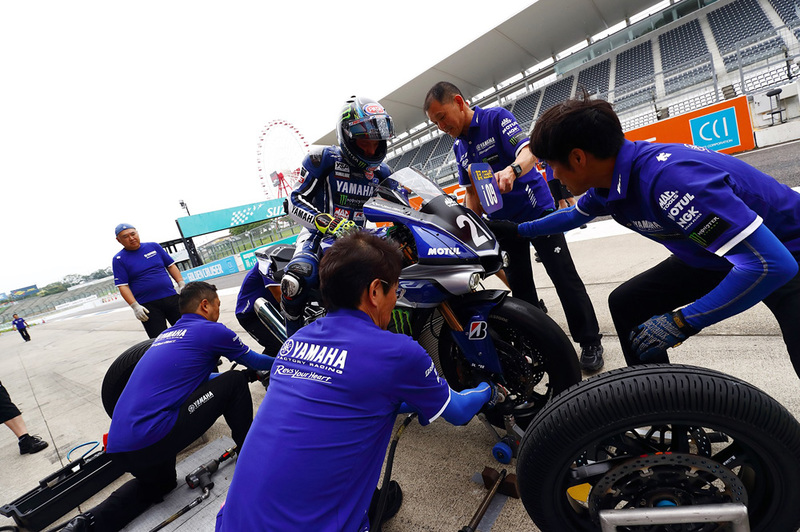 The next outing for the Yamaha Factory Racing Team is slated for July 13th and 14th, when the team will join a group test with three other manufacturers. Nakasuga and Lowes will participate in this test, as the team works to further improve competitiveness before the Suzuka 8 Hours race on July 31st. As their goal for this year is nothing less than a second consecutive race victory, the key for the final test will be to focus and maintain a balance between their feelings of confidence as champions and their intensity as challengers working hard for another win.

Between now and the race, the Yamaha Suzuka 8 Hours Website will release articles on a variety of 8 Hours related topics. Please check back for all the latest information.

“Our testing time was cut short by the weather, but I was able to do everything I wanted to do in this test. We made progress with our tire choice for the race, so all-in-all I think it was good. The three of us are jelling well together, too. Pol [Espargaró] and Alex [Lowes] are both high-caliber riders, so the three of us combined have a good average pace. I'm sure the level will get even higher during the race weekend. Pol keeps saying, ‘Nakasuga is going to take the pole position this year!' but when he flips the switch he can be blisteringly fast on track. I'm leaving superpole duties to him this year!”

“I didn't get to do as many laps as I wanted to because of the rain, which was unfortunate. But, I'll consider it good luck that we had did have at least some dry time on the track! It's been a while since I've ridden the R1, so I was able to get my feeling back with it and also try some new settings. So, overall I'm happy. My pre-race testing ends here, but I think some fast, efficient progress was made compared to last year when everything was new to me. I think this was enough time to make the preparations we need to be ready. You know, I might not be able to take the pole position this year. Why? Because Nakasuga-san is really fast! But to be serious, our main goal is to stand on the top step of the podium. We've got good riders, a fast machine and an incredible team behind us, so we have everything we need in place to win, but you never know what's going to happen in a race. We're going to do everything in our power to give everyone something to celebrate after all is said and done. I believe if we make that our goal, the result we're aiming for will come.”

“Last year was my first time to ride the Suzuka 8 Hours, but this year the team and machine are different, so everything is new to me. I was really looking forward to learning a lot during this test, so it was a shame about the rain. But, I had a chance to get used to this R1, which is a different spec from the one I ride in World Superbike, and to get used to the tires, so I gained a lot from this test. There's still a lot left to do though, and I intend to change my riding style up a bit. I'm hoping I can do a lot more laps at the next test. The atmosphere in the team is really good. My teammates are both good guys and the staff are out there giving it their all, so I'm in a great environment where I can relax and do my job. Of course, I do feel a bit of pressure riding for the team that everyone expects to win, but that helps me push myself harder to make it happen. I'll do my best to be ready.”

“The weather was unpredictable, which certainly wasn't ideal. Our three riders, Pol Espargaró, who just finished the Dutch TT at Assen, Alex Lowes, who is recovering from injuries he sustained riding in World Superbike, and Katsuyuki Nakasuga, who came straight here after his All Japan race finished, were all able to come together as a team and get through the program we had set out for them at this test. Espargaró's cheerful nature lightened the mood and lifted the whole team's spirits. He's very motivated to ride here for a second year, and on top of that he's extremely fast. Lowes' injury didn't affect him at all as he adapted to the new environment and gradually upped his pace on the track. We put a lot of trust in Nakasuga, which was evidenced by how many items we had him test here. Part of his job is to use his experience to act as a balance between the other two riders and he has done a great job with that. Thanks in no small part to his efforts, the synergy among the three riders is shaping up nicely, and our machine settings are moving in the right direction. So, we're really looking forward to the race weekend at this point. However, although we won last year, it was certainly not a race that we could be fully satisfied with. Whereas before we were able to win with momentum alone, we know how hard it's going to be to run a race where we are able to control every variable and take a second consecutive victory this year. For the next test, we'll do everything we can to prepare ourselves so that we can run a winning race that everyone can be proud of.”